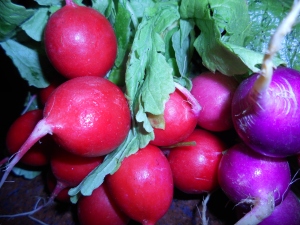 When I was a little girl, I hated radishes. Their peppery bite was too much for my young palate, and the “killer radishes,” as I had nicknamed them, would be piled into a white and red tinged mountain on the side of my plate. This process proved successful for my first 21 years. Then one warm Friday night during my semester in Jerusalem, I came face to face with a cottage cheese dip dappled with chopped radishes. I was apprehensive at first — cottage cheese, um, kind of yuck — but I was starving and that dip was the focal point of an otherwise rather mundane meal. I plopped a small teaspoonful on the side of my plate (where radishes belonged) and apprehensively scooped some on a celery stalk. And the killer radishes did not kill me. In fact, they were pretty darn tasty. I basically polished off that dip and walked away thinking, radishes, hmm, not bad at all.

It’s been over a decade since I saw the red radish light. One way to make me swoon: thin discs of radish melted in a pan over butter, sprinkled with a little salt and some chopped green onion. That was my favorite way to eat radishes until I found this recipe. I should first admit that I love just about anything pickled, but there’s something about this dish in particular — the sweetness coupled with a mellowed ginger — that I really really love.

Radishes, I have learned, are pretty darn cheap. We’re talking a bunch for less than a dollar. Russo’s had them this week at two bunches for $1.50. I’ve gotten nearly a pound’s worth at Market Basket for $1. One dollar, people. A dollar. Even better, they are ridiculously simple to grow. If you do have a plot of land, no more than a square foot, or even a pot,  just plop some radish seeds in the soil in late spring. Make sure there’s sun and they are watered regularly, and by July, you’ll be plucking radishes from the land.

(My only caveat is if you live in an older house, please get your soil checked. Most houses around here were covered in lead paint at some point, and lead paint usually means lead in the soil.)

1 bunch of radishes, trimmed and quartered

Note: I keep my ginger root in the freezer. I’ve found that it really extends its life. For this recipe, all I do is set the root on the counter for about 10 minutes. It slices and dices just like a fresh piece does. The frozen root also grates easily with a microplane.

Place the quartered radishes in a bowl and toss with salt. Let stand at room temperature, stirring occasionally, 1 hour.

Drain in colander (do not rinse) and return to bowl.

Add vinegar, sugar and ginger, stirring until sugar has dissolved.

Transfer to an airtight container and chill, covered, shaking once or twice, at least 12 hours more (to allow flavors to develop).

Pickled radishes can be chilled up to 3 weeks. 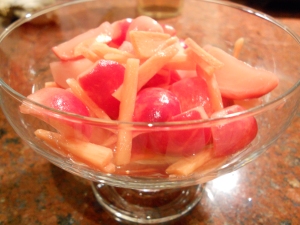 ...After. The pickling makes my red radishes quite pink.