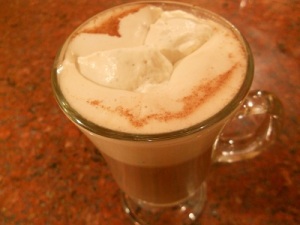 We once had a roommate who went on food jags. One month, he ate a thick bowl of oatmeal every day for dinner.  Another month, there were endless waffles drizzled with syrup. He was very full after the month of Hungry Man dinners, and he swore to never eat another bite of buffalo chicken anything after his month of binging on the spicy wings.

I am in the throes of my own food spree right now: I am full-on in a cardamom jag. Today I’m offering up two recipes with cardamom, next week there will be a third. I hope by then the urge to sniff and savor this woody, floral spice will be out of my system.

My affair with the green pods started innocently enough; in fact, it caught me by surprise. (Isn’t that always the way with life’s great romances, though?) Last week we went to a ginger party, where guests were invited to bring a ginger-spiced dish to share with the group. There was ginger tea, maki rolls made with pear and candied ginger, cucumbers quick-pickled with rice vinegar and ginger, and sundry ginger-flecked baked goods. I used a Ming Tsai recipe I had bookmarked a few months earlier. It was his version of a fruit cake, East/West-style, with molasses, candied ginger and an array of spices. It was decent enough. I mean, it was cake, and, as a general rule, cake is good. But it was really the whipped cream that was served atop the cake that was the best part. Freshly whipped with cardamom and brown sugar, I may have licked the entire Kitchen Aid Mixer bowl and whisk before even letting Rich know what we were bringing to the party.  (I actually just walked into the kitchen in time to see Rich flat out dipping his entire hand into the  mixer to scoop up a fist full of cream. For reals.)

Some might argue that cardamom is not a cheap spice, but I beg to differ. You can pick up a hefty bag for a couple bucks at the  Armenian stores in Watertown. What you want are the black seeds inside the fibrous pods. For this dish, I slit open the pods, shook out the black seeds, and ground them up until I had the right amount.

(Today I used my spice grinder — a coffee grinder I picked up at Ocean State Job Lot for $15 last year. Ordinarily, I might have used my mortar and pestle that rests on the counter, but Rich borrowed it last week and lost the pestle. Not to worry, he finally found the pestle on Friday morning. It was in the garbage disposal. Rich owes me a new mortar and pestle.)

You can always buy cardamom already ground, but it will not last quite as long as using the seeds from the pod. It’s a good idea to have the pods on-hand if you’re interested in exploring Indian dishes. It’s cardamom you’re tasting in an Indian restaurant’s rice; a few pods tossed in while the rice is simmering is what beckons a Bombay banquet.

1 1/2 Tablespoons unsweetened cocoa (I used Ghiradelli because that’s what I have in my cupboard. I am sure any brand will be great.)

A sprinkle of cinnamon

Mix cocoa, sugar and spices in a small dish. Pour milk into a small pan, add the cocoa mixture and stir. Heat, while stirring, until steaming.

In a chilled bowl (I put the bowl of my mixer in the freezer for about a half hour the first time I did this recipe, the second time, I didn’t bother), combine the cream, brown sugar and cardamom until stiff peaks form.

To assemble, find the biggest mug in your kitchen — trust me, you’ll want as much of this as possible — and fill it about 3/4 of the way full with the hot chocolate. Then, fill the rest of the mug with the whipped cream.

There’s enough whipped cream for several servings. I’m not sure how many. My guess would be four or five. But the amount will correspond directly with the will-power of those assembled. I make no promises.