“It was like hundreds of gunshots.” That’s how one family friend described the sound of tree branches snapping and falling to the ground last Saturday evening. Western Massachusetts’ best asset, the foliage that people travel from around the world to see, proved to be its undoing during this very early Nor’easter. My little town, Longmeadow, was hit with 12 inches of snow, which fell onto trees still wearing their autumn finest. The combined weight of snow and leaves proved too much for the branches, which took out power lines as they crashed down. Most of the town has been without power since Saturday night. My parents, who had no electricity or heat, were our houseguests until today, when they got word that their power was restored.

One friend from high school reported that her parents said it will be 100 years for our town to once again look like the town we grew up in. A century is a long time, although it’s doable for my town. Settled in 1644, we still celebrate an annual May festival on the town green, a long strip of grass on the outskirts of town that farmers would take their cattle out to pasture on. Lining the green are colonial houses, marked with stars to indicate their historic status. It is believed that John Chapman, better known as Johnny Appleseed, once lived in one of those houses. His myth continues, even if many of his trees do not. 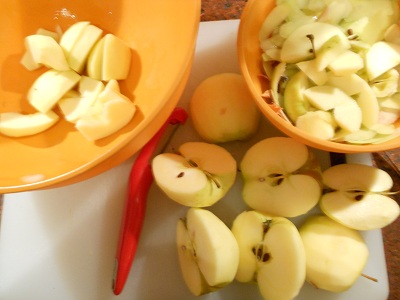 In just a few weeks, it will be my 15 year high school reunion. I’m a little nervous to return to see a town so different than the one I left.

This simple recipe is from one of our favorite cooking shows on PBS: Caprial & John’s Kitchen. It’s not just the recipes in the show, but the chemistry this real-life married couple has on screen. Well, calling it chemistry isn’t exactly accurate; it’s more like watching a married couple who have to work, cook, and go home together. There’s a lot of correcting by Caprial to anything John does or says. Example: John will suggest a shortcut to the viewer, which Caprial will promptly veto as a terrible idea. We showed an episode to our friend Ben, a clinical psychologist, and he dubbed them the passive-aggressive chefs. But judging by this recipe, it’s working for them.

Roasted Apples with Shallots and Thyme

5 shallots (about ¾ cup), peeled and halved

1/2 Tablespoon of fresh thyme (about 4 sprigs)

Place a metal pan in the oven and preheat it to 500.

Toss apples, shallots, thyme, olive oil and salt in a bowl. Carefully pour the ingredients into the piping hot pan – it will sizzle – and close the oven door. After 5 minutes, give them a stir with a wooden spoon. Close the door, and check them again in another five minutes and give a stir. Follow up one more time, for a total of 15 cooking minutes. The apples will have softened, many will have completely lost their shape and integrity, making an herbed, savory apple dish. This will make a wonderful side dish for your Thanksgiving table.

UPDATE: I sauteed these leftovers with some frozen pierogies last night for dinner and it was really terrific.