It’s been a rough week here in Boston. We’re safe. Everyone we know is safe. We live far from the finish line, but a mile from Watertown. I don’t have anything profound or original to say about the situation, except that last week’s events have put my ongoing series of pressure cooker recipes on hiatus for the time being.

Instead, I’m going to share a story from this summer that always make us chuckle. It happened in August, during my second trimester.

MOLLY: “It clearly said on the container “peanut butter explosion,” and I’m telling you, there was no explosion.”

RICH: “You’re a crazy pregnant lady. Please get off the phone.”

MOLLY: “Honey, the ice cream container specifically said that if I had a problem with their product to call the 800 number. I bought this container of ice cream because it promised me a chocolate-peanut-butter explosion, and there was no explosion. There was not enough peanut butter in this ice cream.”

A few weeks later, a coupon arrived in the mail from the ice cream company for a free product of theirs with up to a $7.99 value. 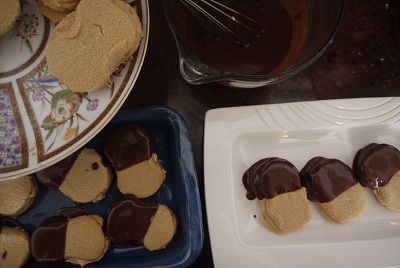 Still, this incident led me to take stock of the outsized role that the chocolate-peanut-butter flavor combination plays in my life. There were other clues: there was the fact that I didn’t hesitate to eat the squished Reese’s Peanut Butter Cup I found in my spring jacket pocket last week. (It was not delicious; we think it was from Halloween.) Another was, when I was sent a cookbook of “homemade versions of your favorite brand-name treats,” I zeroed in on the homemade Nutter Butters’ recipe, but with an important amendment: I would bake them, and then dip each end in ganache. And that’s just what I did. Chocolate Peanut Butter Explosion accomplished. At this rate, I’m never going to shed the rest of this pregnancy weight, but honestly, after this week, it really doesn’t matter. 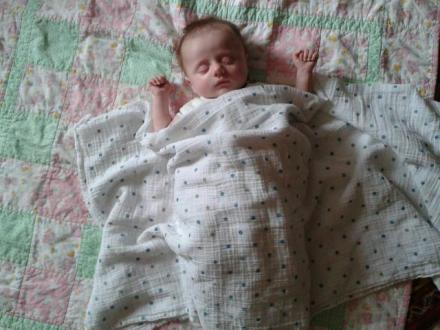 The cookbook is Classic Snacks Made from Scratch: 70 Homemade Versions of Your Favorite Brand-Name Treats, written by Casey Barber, editor of the online magazine Good.Food.Stories. (www.goodfoodstories.com). It’s full of really great-sounding recipes for things like Nutter Butters, Mint Milanos, Twinkies, Goldfish Crackers, Funyuns, and Klondike Bars. A lot of its stuff was forbidden fruit growing up, first because my parents were more into actual fruit rather than giving us packaged treats, and, second, because a lot of it isn’t kosher. 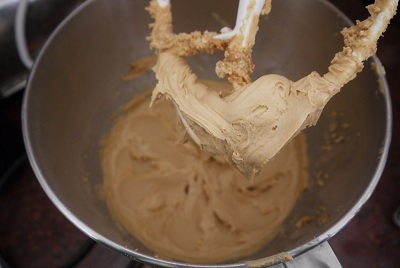 I’m happy to report that the Nutter Butters were spot-on, and really not a big deal to make. I made these this afternoon. I was able to feed Lilli, change Lilli, dunk a diaper, put Lilli down for a rest, and also have her hanging out with me in the kitchen, in between steps. They weren’t a big deal to make, really, and I’m saying that with a 12-week-old napping nearby.

The ganache is just a basic recipe, although I want to make note that the Ghirardelli chocolate I used was purchased at Ocean State Job Lot for $2 a bar. (I bought four. They’re in the freezer.) I rarely (and by rarely, I mean, never) use Crisco, but was pleased to discover that it is sold in bars, like butter, making measurements very simple.

One Note: If you’d like to join me in donating to help the victims and families of the attack, you can do so at The One Fund.

*Spritz your measuring cups with baking spray to help extract all the peanut butter you’ll be using for this recipe.

4 oz. bittersweet or semisweet chocolate. (I’m not going to be picky and tell you to use the good stuff. If you only have chips in the house, they’ll work just fine.)

Whisk the flour, baking powder and salt together in a medium bowl; set aside.

In the bowl of a stand mixer fitted with a paddle attachment, beat the butter and sugar together on medium-high speed for 3 minutes, until light and fluffy. Scrape down the sides of the bowl and stir in the egg and vanilla on low speed. Add the peanut butter and stir on medium speed for 2 minutes more.

On low speed, stir in the dry ingredients a half cup at a time until just incorporated.

Spread 2 large sheets of plastic wrap on clean surface and divide the dough into 2 equal parts on the sheets. Wrap each piece tightly to form a rough cylinder about 8 inches long and 1 ½ inches in diameter. Place the dough logo in the freezer for 30 minutes.

(Please note: Lilli woke up from her nap at this point, so the peanut butter dough logs were a little more frozen than they should have been. All I needed to do was have the logs rest on the counter for a minute or two until they were a little less freezing.)

Cut the chilled dough into thin (no more than ¼ inch) slices and place on the prepared baking sheets. Put the sheets in the oven for 30 seconds, then remove and form each cookie into a rough peanut shape by squeezing the sides gently in the middle to form grooves.

Return the sheets to the oven and bake for 13 to 16 minutes, until the cookies are dry and no longer shiny on top but not yet browning on the edges. They will seem slightly underbaked, but remove them anyway. Cool the cookies completely on wire racks.

While the cookies cool, make the filling. Cream the powdered sugar, peanut butter, and shortening together until fluffy, using a stand mixer fitted with the paddle attachment or an electric hand mixer – first on low speed until the sugar is incorporated, then on high speed to fluff it up.

Spread the filling evenly on the flat (bottom) side of the half cooled cookies. Top with remaining cookies.

In a small saucepan, gently heat the heavy cream to a boil on a medium-low burner. Remove the heated cream from the stovetop and pour over the bowl of chocolate. Let stand 10 minutes. Whisk the cream and the chocolate, which will be very melted at this point.

Dip one end of each cookie into ganache and lay the cookie on a baking pan or plate. To chill the ganache, place the tray in the refrigerator for at least 20 minutes.

Store the cookies at room temperature in an airtight container, with pieces of parchment paper in between the layers of chocolate-covered cookies, for up to a week.