Rich had an early morning meeting in Western Mass. last Thursday, so we decided to make a vacation of it. We stayed overnight at my parents the night before, had Vietnamese for lunch (my not-so–secret obsession) after his meeting, and then headed over the mountain to Monson to pick apples at Echo Hill Orchards, the same apple orchard Mom used to take us to when we were kids. Of course, Lilli slept through the entire adventure, foiling my plan to pose her for adorable autumnal photos. But Mom, Rich and I had a wonderful time picking a quarter peck each of apples, followed by cider and fresh cider doughnuts. 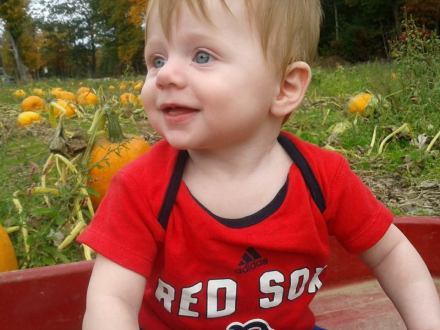 Fortunately we made it to a pumpkin patch this weekend. Autumnal photo shoot under control.

I first baked this apple cake before we went out to my parents, so they could enjoy it for breakfast. It was made with the first of the apples from the CSA box. (A good thing, since, as we learned last year, they are full of qi.) I couldn’t find the right pan for it, so I made it in a round cake pan, then put the excess in a loaf pan. I actually had heavy cream in the house because I had made the glorious stuffed cheesy pumpkin the night before, so I was able to make the sticky toffee topping to pour on top while the cake was still warm.

The recipe calls for walnuts, but Mom, Rich and I decided that one could substitute pecans for those, like Sylvie, with allergies. I did just that for the second time I baked this cake (in the right sized pan this time), but I didn’t have enough heavy cream for this second batch, this time using the apples we personally picked. 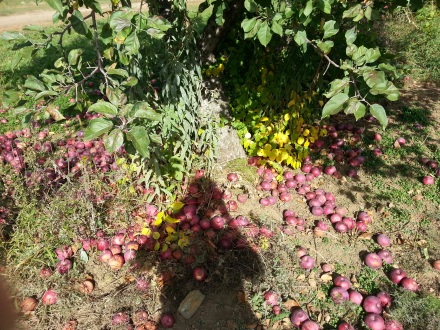 The recipe is from Heirloom Baking with the Brass Sisters. I told Mom how that the original, 1930s recipe card the Brass sister found said the toffee topping was optional, prompting a scoff. “This might be the best apple cake I’ve ever had,” she said. “Although, it could use a scoop of vanilla ice cream.” Funny, because that’s exactly what the Brass sisters said about the cake as well.

I didn’t have the heavy cream for this second try, and in retrospect, I think a sprinkling of Turbinado sugar, or perhaps just some sugar mixed with some cinnamon, would be a quick and easy substitute topping. But please do aim to make it with the toffee topping. It takes it from apple cake to apple cake!

One tip: anywhere it says “sifted flour”, I just take a whisk to the bowl of flour and twirl it a few times. Works like a charm. And when it says to sift the sugar, I just turn on the mixer and have the paddle go around a few times. Easy peasy.

Set oven rack in the middle position. Preheat oven to 350F. Line the bottom and sides of a 9-inch by 13-inch pan with foil, shiny side up, and coat with vegetable spray.

To make the cake: Sift together flour, baking soda, salt and cinnamon.

Pour batter into pan. Bake 1 hour, or until cake pulls away from sides of pan and tester inserted into cake comes out clean. Cool on rack 25 minutes, or until just warm.

To make the toffee topping: Melt butter in a heavy metal saucepan over low heat. Add brown sugar and salt and whisk until blended. Add heavy cream, increase heat to medium, and stir with a wooden spoon until mixture comes to a boil. Boil 5 minutes, stirring constantly. Remove from heat. Mixture will thicken as it rests.