When I was pregnant, a good friend of mine suggested we buy a membership to Costco, to help defray the cost of things like diapers. We snorted at the time, because we planned on using cloth. But three months of daily loads of laundry had us questioning both environmental and practical benefits of that decision. 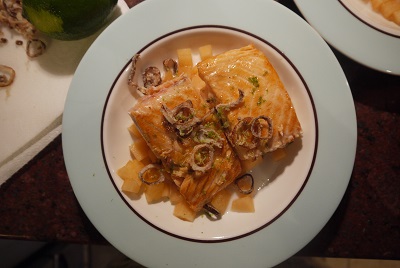 So we got a Costco membership, over Rich’s objections. He just didn’t see the point of having to pay to shop somewhere. I kept on insisting we’d find a use for it, and I like the fact that the company pays a living wage. I also like that I don’t have to make us lunch or dinner when we hit it up on a weekend because of all the free samples, and I know he likes any opportunity to eat pork, even if it’s just on the end of a toothpick. He finally relented when, after our microwave gave up the ghost, he discovered that the difference in price between a new one at Costco and elsewhere more than covered the cost of membership.

But other than the occasional small appliance, I keep going back to Costco for a relatively short list of items: bulk hazelnuts, bulk frozen fish, bulk brown rice and produce in the wintertime. I’ve never been bashful about my love of fish; that’s why I call this blog “mostly vegetarian.” And it turns out that Lilli adores salmon as much as her mommy. So I often grab a few frozen filets the night before and toss them in a bowl in the fridge to defrost during the day. I rub a little olive oil and a pinch of kosher salt on the pieces, and simply roast them in a hot toaster oven for less than 10 minutes for a quick weeknight dinner. I cook up a huge pot of brown rice in my rice cooker once a week, and enjoy that on the side. 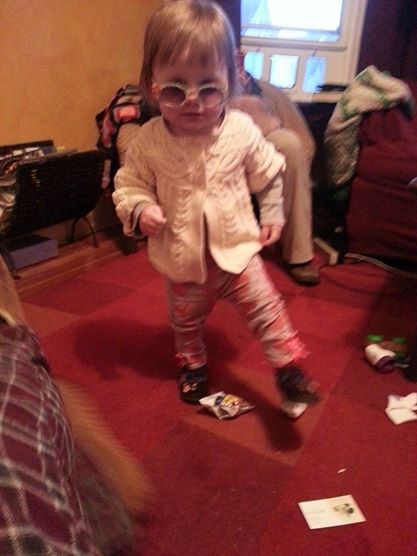 Fish? Did you say fish?

But when I saw this recipe for salmon with cantaloupe and fried shallots in my 2011 Food & Wine Annual Cookbook, I knew we had a keeper. Lilli not only loves salmon, but she also eats cantaloupe at nearly every meal. And when I told Rich I found a recipe that called for both salmon and cantaloupe he noted that there is a slurry of that in her bib after almost every dinner. The fact that this had a dressing of fish sauce, brown sugar and lime juice, my own favorite trinity, was icing on the cake.

I actually had everything in the house for this dish, so it is a pantry dish, at least in my world. I eliminated the horseradish from my version, simply because I despise the taste, but I’ll leave it in parenthesis in case that’s up your alley. I also left out the celery leaves because I never have celery in the house. Buttermilk seems to always linger next to the milk in our fridge.

I would suggest zesting the lime before you juice it; I wish the printed recipe would have said that. I didn’t scoop the cantaloupe, but used the small pieces I serve Lilli, which turned out to be just about a ¼ of an inch in size.

I’d never fried shallots before and overdid the first batch. Set a timer for four minutes and don’t think they need to be any darker when the timer beeps, because they don’t.

The salmon from Costco is skinless, but I followed the directions on the recipe and it worked beautifully.

This dish is fantastic. As Rich put it, “wow, this was like eating in a fancy restaurant!” Costco, people. Costco.

Juice of 1 fresh lime (remember to zest the lime first!)

Four 6-ounce salmon fillets with skin (or, four pieces of frozen salmon from Costco you will have defrosted the night before)

1/3 small cantaloupe, scooped into small balls or cut into ¼-inch dice (about 1 cup)

The vinaigrette and fried shallots cane be kept at room temperature for up to four hours.