Now that my CSA nightmare has ended, I’m back in charge of deciding what ends up in my crisper and root cellar. I hit up Russo’s on my lunch break this week and piled my basket high with butternut squash, kale and red potatoes. There were also two eggplants, which I wasn’t going to mention because I bought them sort of off-season, but these eggplants were just so gorgeous and on sale that I couldn’t help myself.

Again, I wasn’t going to say anything, but I ended up using this recipe twice in a four-day period, and then this afternoon I found myself reciting it out loud to a complete stranger at a friend’s house who agreed it sounded fantastic. 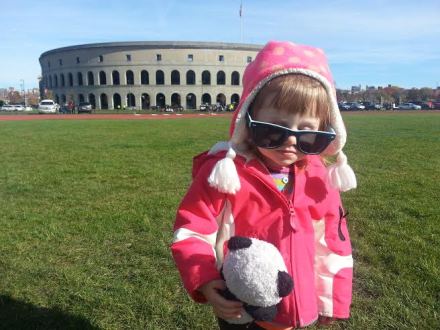 It’s called Eggplant with Capers, although I cut down on the amount of capers the recipe called for. (Four tablespoons sounded like too many for one eggplant.) I also skipped the green olives, but that was only because I couldn’t find the enormous jar of them we bought at Costco this summer. How one loses a gallon of olives is beyond me, but I’ll just accept it and move on.

The recipe is from The Vegetarian Epicure by Anna Thomas, and according to its cover, I bought it at The Strand in August 2001. The cookbook is so 1970’s, with its browned cover with green and orange accents. It reminds me of Moosewood Cookbook in a lot of ways: cover design, illustrations, an emphasis on eggs and cheese. There’s also a crepe and pancake section, so who am I to judge?

Don’t flinch at using just a tablespoon of tomato sauce – use the rest of the can for a bowl of eetch and all of a sudden you’ll have a very nice meal. As for warming the vinegar and sugar, I heated it for about 15 seconds in a glass in the microwave, or just do it in a small saucepan on the stove. The first round of this eggplant was eaten with starches we had in the fridge – leftover brown rice one night, on top of leftover soba noodles the next day at lunch. The second time I made it, we served it at a dinner party on top of some crusty bread that had dried cranberries, dried figs and sunflower seeds baked into it, also from Russo’s.

I’m treating it like a caponata, because it really is one. It’s vegan, and great hot or cold. Seriously, go make this dish, or at least bookmark it to serve on Thanksgiving.

Eggplant with Capers from The Vegetarian Epicure by Anna Thomas

Salt and pepper to taste

A large, nonstick skillet with a cover is best for this.

Saute the eggplant in 2 Tablespoons of the olive oil. When it begins to get soft, remove from the pan, and put it aside. Add the third tablespoon of olive oil and saute the garlic and onion until the onion is golden. Then add the celery, the tomato sauce and a few tablespoons of water. Cover, and let this steam for 10 to 15 minutes, stirring occasionally. Add a little water if necessary.

Now, return the eggplant to the pan, add the capers, chop and add the olives. Heat the vinegar with the sugar and add that also. Salt and pepper to taste, and let simmer gently for another 10 to 15 minutes, being careful not to let it burn.

Serve it hot or cold, with slices of lemon.

One thought on “Couldn’t Help Myself”