More than once in the past few weeks Rich and I have turned to each other and remarked that we moved to Stars Hollow. I personally think there’s a touch of Cicely in there, too, but considering we were standing in The Pie Bar (amazing), and the fellow who poured Rich a cup of coffee was wearing a plaid flannel shirt with a backwards baseball cap, it was hard to argue with his logic.

Our Lobot (Lilli-Robot) getting ready to walk in her first Florence Rag Shag Halloween parade.

We bought a four bedroom farmhouse, built in 1870, in the Village of Florence, which is part of the city of Northampton, my favorite place in the world. Our house has the things that both of us wanted: for me, a playroom for the girls and a guest room, so please come visit. For Rich, it is on the bike path and has solar panels, something that he was going to add to whatever property we ended up with. And, most importantly, it has a nice-sized yard, big enough for a swing set and a sukkah.

The yard was even bigger before the former owners subdivided it. (In-fill zoning and less lawn to mow — two other Rich things.) The lot was so big that it had served as a community garden for a while. It still has a nectarine tree, apple trees, pear trees, two cherry trees (sour and sweet), and bushes of blueberries and black and golden raspberries. In front of our house there’s an asparagus patch! It’s pretty scraggly looking, so when you pull up, please don’t judge. But springtime will be heaven.

Florence was an abolitionist utopia during the 19th century. Sojourner Truth actually lived here, and it was a stop on the Underground Railroad.  Black lives have mattered for a very long time here. The views of the Holyoke Mountain range are so breathtaking that the valley became a destination for health respites. There’s a vibrant arts scene — the  Teenage Mutant Ninja Turtles were created in one of the art studios in town – and there several (vinyl) record stores.

We’re right outside of the center of Florence, which has everything you need: an utterly charming diner, a hardware store, some antiques stores, a flower and gift shoppe, a post office, a coffee shop (with a play area for kids), and the aforementioned pie bar. There’s an amazing Chinese restaurant whose produce is supplied by the local farms, and a great vegan café. For those in the know, it’s run by the same people behind Fire and Water Café. They have those incredible peanut butter noodles on the menu, and they’re still as good as you remember them being. The vegan café shares a parking lot with one of the two breweries in Florence; there’s a couple more down the road in Easthampton.

We’re also very close to the swimming hole, and the Lilly Library, which is where they hold the farmers’ market on Wednesday afternoons. And even though we’re right outside of the center of town, it’s worlds away from living in Allston. When Bea wakes up at her usual 5:15 AM, I can see the Big Dipper, like bright rhinestones on black velvet, right outside my bedroom window.

As I mentioned, Florence is a part of Northampton, and I’m not kidding when I say it’s my favorite place in the world. I was trying to put my finger on exactly what it is, and all I could come up with is a word jumble: composting, sturdy Dansko clogs, Subarus, kale, baby wearing, street musicians, strong womyn, Pride, bakfiets, beer, art.

You’ll notice I did not put “gluten free” in my jumble. Northampton has some of the best bakeries in the country, including Hungry Ghost, a 4-minute walk from my office, and across the street from the pharmacy where the shopkeeper calls you “hon,” no matter your age. Hungry Ghost is actually in the process of creating a medicinal herb and plant garden in the front. And of course there’s Tart Baking Company, Bread Euphoria up Route 9, and Small Oven Bakery in Easthampton.

Main Street is full of galleries, and fun shops, and amazing restaurants and incredible beer. If you’d like to see a show, check out the Academy of Music, where I’ve seen John Waters; the Calvin Theater where I’ve seen Tom Jones; or the Iron Horse, where my mom took me to see Dan Hicks when I was a teenager. Alas, the club where Sylvie and I saw Patti Smith once upon a time is no more, but in its place is an amazing beer bar. Smith College, where I work, has an incredible art museum, and the Botanic Gardens are a wonder. It’s the mums show next week, although I prefer the spring bulbs show. And if you can, come on the second Friday for arts night, which takes over the entire downtown.

Northampton is where you move to when you realize you’ve outgrown your Boerum Hill two-bedroom, or if you love your brownstone in Park Slope but wish you had a yard for the kids. If you don’t believe me, ask Mo Willems, who did just that and now lives on the same street as Lilli’s preschool. Eric Carle raised his kids here. Kim Gordon and Thurston Moore raised Coco in an old farmhouse in town. And it was probably a good thing it was Rich and not I who stood next Frank Black and his kids at The Roost. (The pastries there are amazing, although I found the coconut cake a touch too sweet.)

I can’t talk about Northampton without mentioning my favorite restaurant of all-time, Paul & Elizabeth’s. They sell day old wheat rolls for $3 a bag, which I bought and toasted in my own kitchen and ate with lots of butter and jam and realized that life couldn’t get any better. Our first night here, we went there to get Indian pudding, coconut cream pie, and some of their amazing creamy garlic salad dressing to go.

The Connecticut River Valley has some great soil for agriculture, and so there’s a ton of local produce. We’ve been to apple orchards and pumpkin patches already, but if you can’t make it to one, the grocery store sells produce grown by the students through UMass’s farming program. Route 9 going west into the Berkshires is lined with sugar shacks, but if you can’t make it out, you can buy local maple syrup at the grocery store. I counted five local brands last time.

I know I’m going on and on, but there are so many reasons that people call this the Happy Valley, and Northampton Paradise City. But let me leave it at that, and I’ll leave you with a recipe that makes use of some of that great local produce. If you come out to visit, I’ll make it (or something else in season) for you! 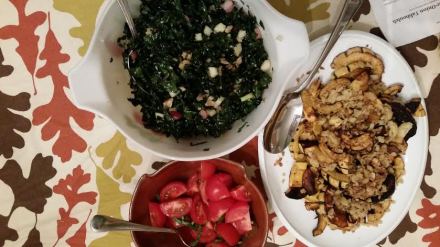 Preheat the oven to 400F/200C and line a large rimmed baking sheet with aluminum foil.

Place the squash on the prepared baking sheet, drizzle with 2 Tablespoons of the olive oil, and season generously with salt and pepper. Toss the squash with your hands to coat. Roast, stirring occasionally, until tender when pricked with a fork, 20 to 30 minutes.

Meanwhile, stir together the bread crumbs, red pepper flakes, remaining 1 Tablespoon olive oil, 1/8 teaspoon salt, and a pinch of pepper in a medium skillet set on medium heat. Cook, stirring often, until toasted and golden, 6 to 8 minutes. Stir in the thyme and remove from the heat.

Transfer the squash to a serving platter and sprinkle with the bread crumb mixture. Serve hot.

One thought on “Take Me Down to Paradise City”