I am a bad food blogger. Let me explain. Purim’s coming up, and as I’m assembling costumes (including a fairy dress that “needs to have buttons up the back”), I realized that I never told you about last Purim, when I snuck away after Carnival for a blogger event. It was for cookbook author and chef Sara Moulton, and it was at Harvest in Harvard Square. Turns out she got her start there, so this was a very special afternoon for her. She collaborated with Harvest’s Executive Chef Tyler Kinett on a very special menu inspired her new cookbook Sara Moulton’s Home Cooking 101: How to Make Everything Taste Better. (Well, new at the time. Like I said, bad food blogger.) 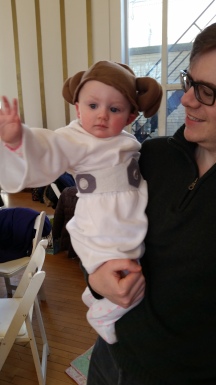 We started with a delicious Spring Pea Soup that had smoked salmon, crispy potatoes and crème fraiche on top, which was inspired by the Pea Vichyssoise with Smoked Salmon in the cookbook. Dessert was La Tulipe’s Apricot Souffle, which she adapted from her time at Gourmet Magazine (z’l). Sara actually called up someone to help her with the demo, but when I saw that the prepared menu in front of me said there was soufflé for dessert and she was holding up a whisk, I knew there was going to be an insane amount of egg whites being whipped – by hand – and I kind of hid my head as to not be noticed for that task. Someone did raise their hand to help out. I think it was a fashion blogger who didn’t see it coming, but she did a wonderful job of whisking, for nearly 10 minutes straight. 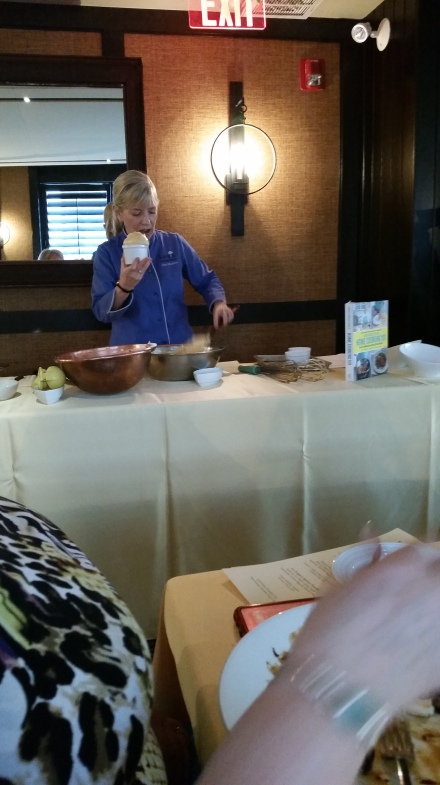 I’m embarrassed to say I don’t remember what my actual main course was. According to the menu I saved, we had “Steak & Eggs,” which was “Braised Short Ribs, Poached Egg and Broccoli Rabe & Butterball Potatoes,” inspired by “Red Wine-Braised Short Ribs of Beef” in the book. But because I write a “mostly vegetarian food blog”, they knew to make an alternate dish for me. I’m a bit mortified to admit I can’t remember what they subbed for it. But I promise you, the soup and soufflé were so good, what came in the middle doesn’t really matter.

What did matter from that event was that Sara was darling and kind and warm and lovely. She is bite-size, super small, and her Converse All-Stars gave her no extra height. I told her how much her nacho pie recipe is enjoyed in our house, and she appreciated the sentiment, or at least seemed to.

The afternoon ended with each one of us receiving a signed copy of the cookbook, and I’ve enjoyed cooking from it these past 11 months. The Beans and Greens Gratin is just about perfect for this time of year. As Sara explains: “When you see the word gratin in the title of a recipe, it means that the dish is topped with a light brown crust usually consisting of baked breadcrumbs or grated cheese. […] Here I’ve combined two hearty ingredients: beans and greens.” It employs one of her favorite tricks for thickening bean-centric dishes, which is mashing some of them. And it works! It’s very hardy, and travels well the next day for lunch leftovers.

I did a “close enough” version of this recently. It calls for fresh breadcrumbs, but since I’m still waiting for my replacement blade for my recalled food processor, I had to use Panko that I had. (Any time now, Cuisinart…)  I didn’t have fresh rosemary in the house, so I skipped it, and it was fine.

The recipe also survived me using a slightly smaller can of beans and a larger can of tomatoes, which is what I had on hand. I used a spoonful of Better Than Bouillon in 1 ½ cups water in lieu of Sara’s Homemade Vegetable Stock. Like I said, close enough.

Beans and Greens Gratin from Sara Moulton’s Home Cooking 101: How to Make Everything Taste Better

2 cups cooked pinto, white, kidney, or black beans, or chickpeas; or rinsed and drained canned beans (a 19-ounce can)

Preheat the oven to 375F. Toss together the breadcrumbs, 1 tablespoon of the olive oil, the pepper flakes and salt to taste in a small bowl.

Heat the remaining 2 tablespoons oil in a large ovenproof skillet over medium heat. Add the onion and cook, stirring occasionally until golden, about 8 minutes. Add the garlic and rosemary and cook, stirring, 1 minute. Add the greens in batches and cook until they are wilted. Mash ½ cup of the beans with a potato masher or fork and add the mashed beans along with the whole beans, stock, cheese, tomatoes, and salt and pepper to taste. Sprinkle the crumbs evenly on top of the mixture. Bake on the upper middle shelf of the oven until the crumbs are lightly browned and the beans are bubbling, 25 to 35 minutes.

When people ask if we’re settled into our new house, I can finally say yes. Well, not including things upstairs. Or the boxes all over the basement. But we called the downstairs settled, with pictures hung on the wall and welcome mats in place, at 11PM the night before Lilli’s fourth birthday party, which was scheduled to start at 11:30AM on the following day. Lilli asked for a dinosaur-themed party, so I found dinosaur paper tablecloths, napkins, and plates, and dinosaur sun catchers as an arts-and-craft project for the kids to work on in the playroom. Obviously, the kids didn’t touch the sun catchers and were totally fine with playing dress-up, making play-dough messes, and sticking stickers on any and all surfaces. 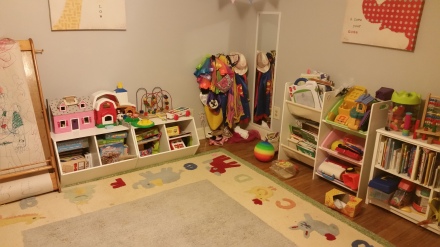 The dress up corner

I called a bakery to inquire about having a dinosaur cake made, but nearly passed out when they told me it would cost at least $100 to make. Undeterred, and not wanting to let down my little girl, I found a dinosaur baking pan online for $10 and hoped for the best. It was not quite Cake Wrecks bad, but I can say without hesitation it was made with a ton of love by me and Rich the night before. It was a vanilla cake with cream cheese frosting, just as she requested, although it probably wasn’t exactly the vision she had in mind. It tasted much better than it ended up looking.

Last year, for her third birthday party, we had a build-your-own cupcake bar. The year before we had a build your own sundae bar. This year, I decided to keep it simple, so we got some party-sized pizzas, which are apparently a Western Mass thing.  But we kept the DIY theme going with a build-your-own salad bar, and a yogurt bar for dessert.

You can really go any direction you want for a salad bar, but mine had two types of lettuce, peppers, grape tomatoes, cucumbers, chick peas, kidney beans, steamed green beans, steamed broccoli, shredded carrots, croutons (store-bought), artichoke hearts, hearts of palm, shredded red cabbage, feta, blue cheese, cheddar, radish, avocado, olives, beets (again, buy the packaged ones), sunflower seeds and raisins. If I had had the time I would have served pickled onions and roasted some Brussels sprouts. I served two store-bought dressings and this tamari and tahini dressing I hadn’t made in years, which was a hit.

Let’s dispel with the notion that granola is healthy. But this granola is particularly not healthy. There’s practically two cups of chocolate chips in every batch. This granola was made as a last-ditch effort to find something for Lilli’s lunch that she would eat and that would not violate the no-nuts rule at her school. I had a little bit of shame about the amount of chocolate and sugar, and debated “pretending” it was carob as far her teachers were concerned. But this is a new favorite in our house, and I’ve found myself making it every week. It’s taken up residence in a massive glass mason jar.

There aren’t a ton of ingredients to it: Some whole oats (healthy), maple syrup from up the road (not terrible), brown sugar (pretty terrible), coconut (which Lilli doesn’t know about), a little oil, and chocolate chips. Nuts had to go, and Lilli turned up her nose at the idea of dried fruit. The way this recipe came about was an accident. I added the chocolate chips too early and the heat of the granola right from the oven caused the chocolate to melt and coat everything, making a dirty good treat. It’s kind of the opposite of when Ruth Graves Wakefield added chocolate chips to her cookie dough, hoping to make chocolate cookies. Instead, she invented chocolate chip cookies. 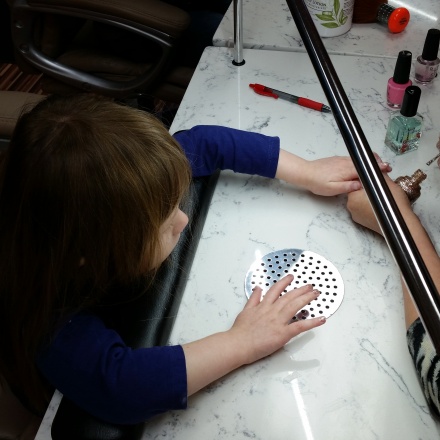 Getting her nails did for the party. (Six bucks for sparkly gold nails that didn’t take me hours to do a so-so job on.)

This recipe comes together very quickly, but you do have to give the oats a little stir every 15 minutes while they bake in the oven. But if I can do it on a weeknight, you definitely can, too. Here’s a little secret from my house: I never can find my quarter cup, so I always use four tablespoons. So when this recipe calls for ¼ cup of something, plus two tablespoons, I just measure out six tablespoons; it’s less clean up time in the end. Keep the large bowl you mixed the granola in to mix the baked granola and chocolate chips together.  I reach for a sturdy spatula to stir the oats in the oven, and then use it to stir in the chips at the end. You can also reuse the parchment-lined baking sheet as a cooling surface after you’re stirred the chocolate and granola to melty goodness.

Lilli eats this at least once a day, with plain whole milk yogurt. I fully acknowledge the amount of chocolate in this bars it from being health at all. But this is a dirty good, and easy recipe. Perfect for a snow day like today!

Combine both mixtures and pour onto one sheet pan, covered with parchment paper or a silpat mat.

Cook for up to one hour and 15 minutes, stirring every 15 minutes to achieve evenly colored golden oats.

Remove from oven and transfer back to the large bowl. Immediately pour in the chocolate chips and stir. You can either leave it in the bowl, or transfer it back to the pan for it to cool off, then break it into pieces before pouring it into a jar.