The heat was on us like five bullies, even in the shade of the tree in the front yard. But the line-up of little sluggers didn’t seem to care. They were waiting to take their swings at the unicorn piñata hanging from the lowest branch. As the final blow spilled erasers, glow sticks, kazoos, and temporary tattoos onto the lawn, one of the grown-ups yelled out, “Call Alex Cora, we have a new slugger the Sox need!” 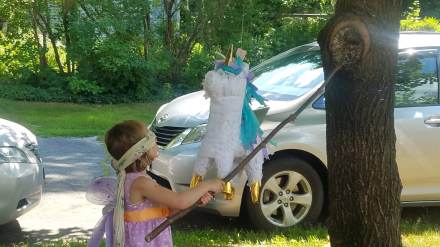 But let’s back up a month, when our younger daughter, Beatrix, turned 4. June is a crazy month for us, full of birthdays, Father’s Days, and our anniversary. So the 4th birthday party was put off to mid-July. Little did we know it was going to be in the middle of the first heat wave of the summer.

It’s actually fitting that it was so hot that day because the theme for the party was inspired by Bea’s favorite book, Island Born by Junot Diaz. It’s a beautiful book about a little girl named Lola who goes to a school where all the students are from somewhere else.

Lola’s class assignment is to draw a picture of where they are originally from. Lola is from “the Island” (the Dominican Republic) but left before she could remember. She goes through her neighborhood asking everyone what they remember. She discovers the sun “can be as hot as five bullies.” She eats crispy empanadas and waxes poetic about mangoes. She learns about the music, the vivid colors, and finally, why her family left the Island.

I took the idea of a Dominican-themed birthday party as a challenge. I convinced a local restaurant to fry up a batch of crispy, vegetarian empanadas. I’m not sure Big Papi would have approved, but they were quite delicious even without meat. Dominican mangoes were magically on sale at the international store this week. We also served agua de cocoa, agua fresca, and pizza for the kids.

It wasn’t all on theme. Using this week’s CSA I made a massaged kale salad with grated carrot, dried cherries, sunflower seeds, and cucumber, and dressed it with a fresh lemon thyme dressing. I also made a corn salad that was more Mexican than Dominican, with pickled onions, grape tomatoes, avocadoes, radish, topped with Cotija cheese, and dressed with a cumin lime dressing. 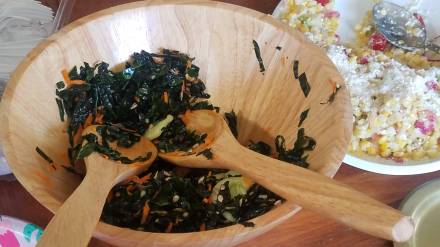 At some point in the home stretch the party morphed slightly with some last minute rainbow-unicorn purchases: a massive balloon, wading pool, and the aforementioned piñata. The pool paired nicely with the used bouncy castle I found online for a hundred bucks late this spring. When they weren’t hiding from the heat in the house, the kids dashed between the pool and the bounce house.

But really, I’m here to talk about the dessert bar Bea and I devised. Rich says now that if he knew what I was up to, he would have put a stop to it, or at least thrown himself in front of the train. But last week I received an offer I couldn’t refuse. Nellie’s Free Range Eggs reached out to me and asked if I wanted to try out their products. Even better, they offered me a gift card to help pay for the groceries.

I try to eat local eggs and dairy, so the first thing I checked was where these eggs were coming from. New Hampshire is close enough for me. Then I learned the hens live on free-range, small family-run farms, and are Certified Humane. This was just what I needed, especially because my colleague who I usually get my eggs from is on vacation this month. 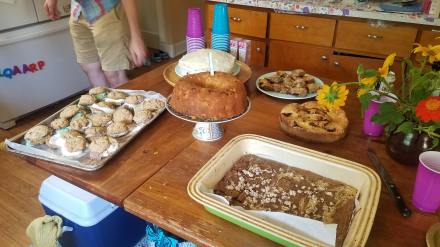 For the dessert bar I baked:

(When I type it out in bullets, it does seem like a bit much.)

These blondies were inspired by a recipe I made a few weeks back for blondies with rhubarb and white chips. I had read about a recipe from Sister Pie, which we got to visit last summer when we went to Detroit. I don’t actually own that cookbook, so I used my own blondie recipe and enhanced it. Those blondies are great, but I’m guessing most of you don’t have a pound of rhubarb squirreled away in your downstairs freezer like I do. On the other hand, it is cherry season right now.

Whether you use rhubarb or cherries, the secret to this recipe browning the butter, which lends a butterscotch flavor to the final blondies. It takes just a few more minutes than if you’re melting a stick of butter in a small saucepan. Stand by it and watch as it goes from yellow to brown but make sure to stop it before it burns. I timed it, and it took about 7 minutes to brown on my induction stove.

Rich bought me an olive pitter years ago that does double duty during cherry season. I still pit my girls’ cherries before I serve them. It also came in handy for a clafloutis that I made last week. If you don’t have one, you can just halve the cherries to de-pit them, or just squeeze the pits out by hand if you don’t mind getting cherry-stained fingers.

Melt a half cup (one stick) of butter in a small saucepan. In about seven minutes, the yellow butter will develop brown spots as it turns from frothy to brown. Watch carefully to make sure it doesn’t burn.

Mix all of the ingredients together, in order of appearance in the recipe, combining them well. Spread in the pan and bake for 25-30 minutes, or until dry on top and almost firm to the touch. Let cool for 10-15 minutes, then cut into small squares.

This post was in part sponsored by Nellie’s Free Range Eggs, now in partnership with the Boston Red Sox!