Recently, someone on our floor at work went to a far off land and brought back a box of dates. (You’ll remember that the boxes of Turkish Delight are brought directly to my desk.) After watching them go untouched for a few days, I took it upon myself to bring them home for a baking project. The result was a date nut bread, which my boss told me it was “the best one she’d ever had”. The New York Times apparently agreed; the title of the recipe is “An Incredible Date Nut Bread”. 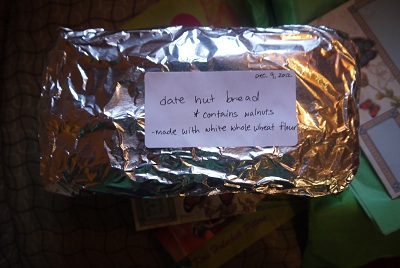 The recipe calls for pouring boiling water over baking soda, and then pouring the mixture onto the pile of chopped dates and raisins. When The Essential New York Times Cookbook editor Amanda Hesser found this recipe, she wrote food scientist Harold McGee to get his take. He replied: “My guess is that the baking soda step is a quick way of hydrating and softening the fruit, and probably turns the date bits into mush, which would help moisten the cake more than discrete pieces.” McGee also thought the baking soda would help make the cake brown, and indeed, as Hesser puts it, “the cake emerges from the oven dark and tawny.” And I can report that it smelled even better than it looked; at one point the scent of the loaf baking in the oven literally stopped me in my tracks. 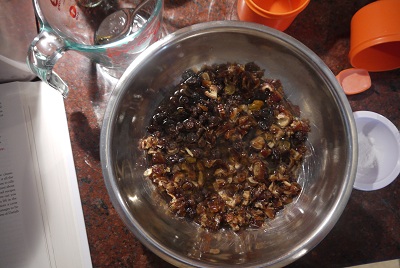 Over Thanksgiving we had a visit with Sylvie and her wife Miriam at Mir’s parents place up in Maine. I had wanted to bring a loaf up as a thank you to our hosts but Syl is deathly allergic to walnuts. As it turns out, so are half of her in-laws, so I think I made the right move. But Mir’s mom said she loved date nut bread, so, using the rest of the purloined dates, I baked her a loaf and sent it to her for Chanukah. It was only after I took it out of the oven that I noticed the title of the December 1977 article from which the recipe came: “Food Gifts You Can Make at Home.”

Baking Notes: I’ve been experimenting with flours lately, and the loaf I sent to Mir’s parents was made with white whole wheat flour. I was a little nervous it would be too dry, but the feedback I’ve received has been very positive. The flour choice is entirely up to you.