Of all the things I gained during my pregnancy – I mean besides 65 lbs. – the strangest of all was an appreciation for Thai food. Most people like Thai food, at least in my circles, but I have never cared for it. I tried to like it, really I did, but the flavors never meshed for me. Something about the sweet and salty, and the spice – especially the spice – didn’t work for me. Love Vietnamese food, but Thai food, not so much. But then I became pregnant, and it was as if a switch was flipped. 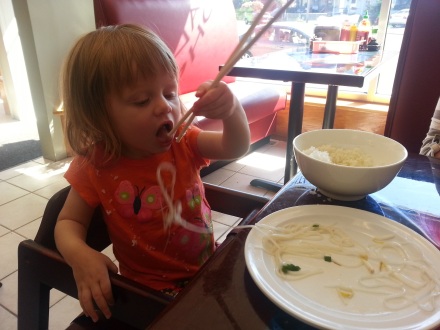 My enjoyment of Thai food became so strong that this year I used a birthday Barnes and Noble gift card to buy Pok Pok by Andy Ricker. Ricker spent years in Thailand learning the cuisine and now has a burgeoning Thai restaurant empire in Portland, Oregon, and New York. He won the James Beard Award Best Chef in the Northwest in 2011. This guy knows his Thai.

So when a handful of kind-of-sad-looking Japanese eggplant came in the CSA a few weeks back, I grabbed Ricker’s cookbook and set out to make grilled eggplant salad. Although the recipe strongly suggested a charcoal grill, I used my oven’s broiler to blacken them. As I assembled the salad, I remembered that my friend Caitlyn, also living in Portland, also a Thai-o-phile, taught me all about this salad when she visited last summer. She even went so far as to find a video of some famous Thai chef making this recipe. “Just skip the step with the shrimp,” she said to me. So I did. And so can you.

A few things about this recipe: Apparently there are dozens of types of eggplants out there, and Caitlyn taught me that small green eggplants are traditionally used in this recipe. That wasn’t an option in my CSA, but the recipe turned out fine. I skipped the fried garlic, only because it called for using thirty cloves and, well, I didn’t have that many in my kitchen. I used the option of red onions rather than shallots because that, along with the chiles and cilantro, came in the CSA. I’m still a wimp about a ton of spice, so even though the recipe calls for 2 chiles, I think I used half of one. I had palm sugar in the house because I found a bag of it in the Gourmet Foods section at TJ Maxx, or maybe it was Home Goods. (One of those two; definitely check out that section if you have the chance. That’s where I’ve found whole vanilla beans for a buck or two.) If you don’t have palm sugar in the house, I think brown sugar will be a decent substitute. I broiled the eggplant one day but only had a chance to make the rest of the salad the following day. I simply heated the pieces of eggplant in a skillet on the stovetop.

I loved this salad. Not sure how many it is supposed to serve, but it served me, and me alone. Rich didn’t even know this salad existed until he edited this post.

Clean, peel and cut the eggplants

Cook the eggplants either on the grill (highly recommended) or in the oven.

Let the eggplants cool for 10 minutes or so. This will make them easier to peel and allow the flesh to firm up slightly. Use your fingers to peel off the skin (don’t go crazy removing every last bit), trying your best to keep the flesh intact. Do not run the eggplant under water. Cut the eggplant crosswise (on the diagonal, if you’re feeling fancy) into 2-inch slices and arrange them on a serving plate.

Cook the Egg: Prepare a bowl of ice water. Bring a small pot of water to a full boil, gently add the whole egg, and cook for 10 minutes. Your goal is a fully cooked egg whose yolk hasn’t become dry and powdery. Transfer the egg to the ice water and once the egg is cool to the touch, peel and coarsely chop the white and yolk into small pieces.

Assemble the Salad: Combine the lime juice, simple syrup, fish sauce, and chiles in a small saucepan or wok, set it over medium heat, and heat the mixture just until it’s warm to the touch, 15 seconds or so. Pour the warm mixture over the eggplant. Sprinkle on the egg, shallot, and finally, cilantro.

Let it cool before storing. The syrup keeps in an airtight container in the fridge for up to 2 weeks. 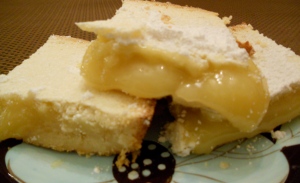 Making lemon curd used to scare me until this recipe.

I grew up in a very conservative town, and my nose ring, pink hair and green Doc Martens cast me as a bit of an outsider. But, that doesn’t mean I was alone. I developed some wonderful friendships in high school, and still carry on those friendships to today.

One terrific friend in particular was Caitlyn Webster. I haven’t seen Caitlyn in years — she’s spent the past five years living in Thailand as a web designer. Thailand is pretty darn far away from Western Mass. where we’re from, so whenever Caitlyn would feel homesick, she’d bake all sorts of wonderful things that she used to bake with her grandmother growing up. Her baking became so popular that she ended up writing a book “American Baking by Cee!” — in both Thai and English on facing pages. It’s full of her adventures baking American treats like chocolate chip cookies and the WORLD’S BEST LEMON BARS. 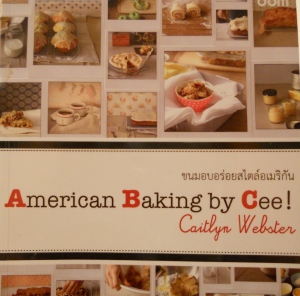 If you’re interested in getting hold of Caitlyn’s wonderful cookbook, please feel free to contact me. In the meantime, check out her gorgeouswebsite about Thai cooking.

Caitlyn will be moving back stateside in the next year to settle down in Portland, Oregon. I’m really looking forward to having a visit with my dear friend from high school, and do things like, as she said this week, “ride our bicycles, go to farmers’ markets, and hear live music.”  I can’t wait, but in the meantime, I have her lemon bars, and now you can, too.

The nice thing about this recipe is that it’s all stuff you should have in your pantry, and even the perishables are things you should keep on hand in your fridge. Lemons are always at least two for a dollar, anywhere. Eggs are always a good thing to have on hand, except these. I have no preference on a brand of butter. For me, the cheapest works just fine. If you see butter on sale, buy a few boxes and store them in the freezer. It will always thaw beautifully and be good to go for baking things, shmearing things, or frying things in a jiffy.

From American Baking by Cee!

Don’t fret if you don’t have a stand mixer. In fact, Caitlyn uses no machines at all in her entire book. All her baking can be and is done by hand. 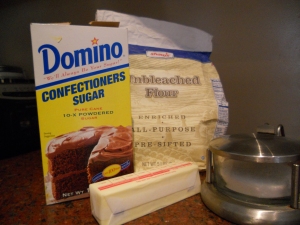 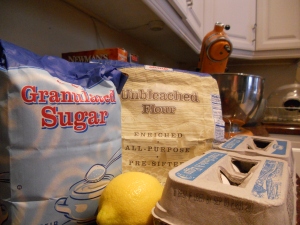 ½ cup fresh lemon juice [I use a whole lemon — MP] 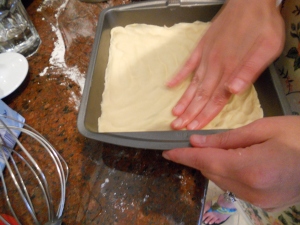 This is my most absolute favoritist dough to work with. 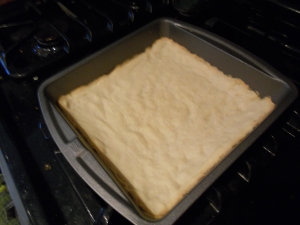 While the crust is cooking, whisk the eggs, sugar, lemon zest, lemon juice and flour in a bowl. Pour this over the finished hot crust and continue baking for another 23 – 25 minutes, until set. 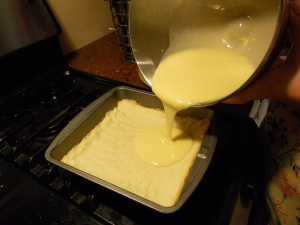 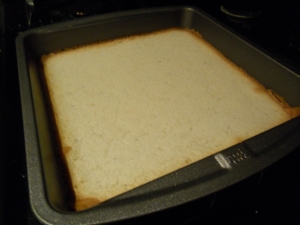 Remove from the heat and let cool completely before cutting. 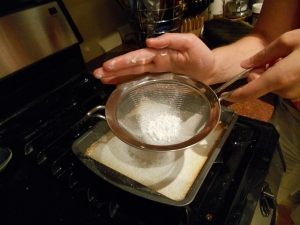