Well, it’s official. Today Cheap Beets is one year old. It really has just zipped by. I remember, as I turned the kitchen calendar to March, saying worriedly to Rich, “But I didn’t even get to talk about Brussels sprouts!” And all of a sudden it was June and not a word about asparagus. “Don’t worry,” he assured me, “there’s always next year, and the year after that.”

When I started the blog, I was on a mission: To help people eat well during the recession. We’d been through a layoff and survived it with very full, happy bellies, and I wanted to assure as many people as would listen that they could do it too. I spent a good deal of last summer worrying about what to call the blog: Rich could see the writing on the wall and suggested I call it “Double Dip” and feature two scoops of my homemade ice creams in the banner. Sigh.

Well, it’s been a year, and I’m ready to let you guys in on a very big secret; a confession, of sorts. Although I do love beets, and radishes, and green beans, and cauliflower, too, most people are shocked to find out that my favorite vegetable is corn. I mean, I know all about the corn subsidies, the evils of high fructose corn syrup and as its nasty use as a filler in animal feed. I know, my dear readers. Oh, I know.

But here’s what you don’t know: I was spoiled by the freshest corn possible when I was growing up. Literally, picked right off the field. Have you ever had it? Then you know what I’m talking about when I say it’s the sweetest, crunchiest, best taste in the world.  Growing up in Western Massachusetts, my mom bought the bulk of our vegetables at the roadside stand in nearby Enfield, Connecticut. Less than four miles from our house, the little town was still mostly farmland well into my high school years. If you wanted corn for dinner, you’d go to Johnnie’s Roadside Market and watch the corn fly down the shoot after it had been picked off the field. My six-year-old niece Becca learned this week that’s how you buy corn, too. I want THAT one, and point to yours as it flies by. And be sure to eat it as soon as you can, the longer it’s off the stalk, the tougher it becomes. When I was young, I wanted to marry a farmer so I could have an endless supply of corn every day. I don’t even need to shmear anything on it. Just plain old corn, followed by a good flossing.

For the past few weeks, we’ve received piles of corn in the CSA, and I couldn’t be happier about it.  I’ve tried to move past eating it plain, as I know not everyone is as smitten with the vegetable as I am. I’ve shmeared it with feta and squeezed lime juice on top of that. Scrumptious. And I’ve taken to making this salad, as well. It’s really just things from the CSA box. I wasn’t even going to post it, but my friend Marianne said I needed to after I brought it to veggie potluck this week.

The longest part of this recipe is the green bean prep, but if you do the Cook’s Illustrated method that I’ve talked about here before (lining a handful of tips together, giving a little cut, and then doing it to the other side), it flies by. Taking another page from the magazine – and I think Alton Brown says to do this too – dig out your Bundt pan and stick your ear of corn, upright, right in the hole. It makes kernel removal a cinch.

Heat olive oil in a large skillet. After 30 seconds, add the garlic, green beans, pinch of salt and the water. Cover, letting the beans steam away in the pan for about five minutes. While this is happening, shuck your corn, and remove the kernels using your Bundt pan and a large, sharp knife. Add corn to the skillet and give a stir. While the corn and green beans are cooking, rinse your tomatoes and cut those in half. Add to skillet and give another stir. Cook for about three minutes longer, then add your basil, another pinch of salt, and cook a minute or so longer. That’s all. Share with others, if you can. I’ll understand if you can’t.

Oh my. Is it possible to devour a head of lettuce?

Winter in New England is tough. But slipping on black ice or climbing over a snow drift to get to a sidewalk isn’t what frustrates me the most about this season.  It’s the fresh vegetable situation. Oh, how I long for August and its ripe tomatoes and corn straight from the cob. I’ve been hungering for salads recently, and have been contemplating persimmons and escarole. But for now, a Caesar salad will do quite nicely.

It’s been a few years since I realized I could make Caesar salad at home. The recipe base I use is from an ancient Cook’s Illustrated, but I do wander away from it after a certain point. (Eight grindings of fresh black pepper? Really?) They suggest coddling the egg, as does The New York Times Cookbook, although Zuni Cafe, which sells more Caesar salad than anything else on their menu, does not. Neither use Worcestershire sauce, although I do, and I really do think it brings it to the next level. It is not key, however.

The key to Caesar salad is anchovies. Anchovies, you might be thinking to yourself, are NOT vegetarian. But here’s the thing:I called this blog “mostly vegetarian” so I could sneak around the anchovy issue. If you’re a fish eater but are squeamish about anchovies, please give them a shot. Anchovies are the cheapest flavor packets I can think of. Ancient Romans doused everything in garum, and many Asian cuisines wouldn’t be the same without fish sauce. When I bite into something with an anchovy in it, I am always struck by all the complex layers of flavor they add.

In most scenarios, you won’t even have to touch them. If you’re cooking with them, beat them in the pan with the back of a wooden spoon. You can get a can of anchovies for less than $3 at any grocery store. Ocean State Job Lot used to have glass jars of anchovies that were really special but hasn’t had them for a while. I toss the remaining anchovies, can and all, into a plastic bag in the fridge. Let them sit for a few minutes at room temperature and the oil will return to form. But please be warned: anchovies are incredibly ugly. I took numerous shots of mine and realize there was no way to make them look pretty. None. 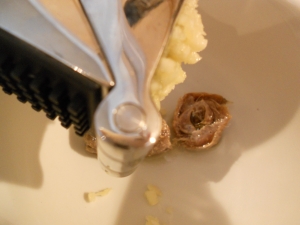 I've gussied up these anchovies with some garlic. Not as ugly now.

Another thing that I love most about this dish is that it is a quintessential pantry recipe. You should have all these things on hand, so when you start to miss out-of-season veggies, you can whip this up in minutes.  It’s even quicker if you don’t insist on the croutons.

2 large garlic cloves, peeled and pressed through a garlic press

Juice of one lemon

3 or 4 flat anchovy fillets, minced (I do mine in a mortar and pestle with the garlic at the same time)

1. For the croutons: Adjust oven rack to center position and heat oven to 350 degrees. Mix garlic, salt and oil in a small bowl; set aside for 20 minutes. Spread bread cubes out over small baking sheet. Drizzle oil onto bread; toss to coat. Bake until golden, about 12 minutes. Cool on baking sheet to room temperature. (Croutons can be stored in airtight container for up to 1 day.)

2. For the dressing: Bring water to boil in small saucepan over high heat. Carefully lower whole egg into water; cook for 1 minute. Remove with slotted spoon. When cool enough to handle, crack egg into small bowl with all other dressing ingredients except oil; whisk until smooth. Add oil in slow, steady stream, whisking constantly until smooth. Adjust for seasoning. (Dressing may be refrigerated in airtight container for 1 day; shake before using.)

3. Place lettuce in large bowl; drizzle with half of dressing, then toss to coat lightly. Sprinkle with cheese, remaining dressing, and croutons; toss to coat well. Serve immediately.

There was an error retrieving images from Instagram. An attempt will be remade in a few minutes.