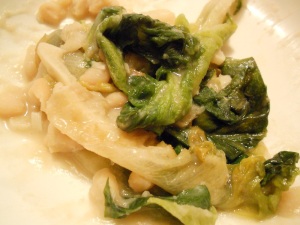 There’s an unassuming Italian joint off of I-84 in Waterbury, Connecticut, called Nino’s Trattoria. It’s actually attached to a Super 8 Motel, so it’s not surprising if you’ve zipped by it a million times and never stopped. But it just happens to be  about half-way between my parents’ place in Western Mass. and my aunt and uncle’s in New York, so a few times a year, we would climb in the car and head out to Nino’s.

They make the most amazing homemade gnocchi primavera I’ve ever had, and calzones so large and bursting with goodies that they take up an entire pizza platter. But our favorite dish on the menu has to be the escarole and beans. Any trace of the escarole’s bitterness has been softened by butter, garlic and creamy white beans.  It comes on a raft of crusty Italian bread to sop up the magical juices for a bonus round of deliciousness.

When Rich and I visit friends in New York City, we ignore the GPS’s advice to stick to the Merritt Parkway so we can fill up on escarole and beans. We made it into the city for a quick visit over New Year’s, but our plans were cut short by a fast and furious bug. We missed our trip to Nino’s, but our hunger for the dish remained.

This is actually one of Rich’s all-time favorite dishes. Sometimes I make it with anchovies, and sometimes I don’t. The pile of garlic, however, is really what makes this dish, so even though the amount I suggest here might be off-putting to some, it’s really what makes the dish delicious. I’ve found that stock adds to the beans’ creaminess, but it doesn’t have to be a meat-based stock. 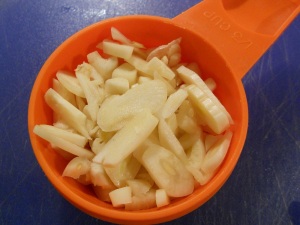 One head of escarole

16 oz. can of cannellini beans, drained in a colander and given a good rinse. (Or, 1 cup of dried beans, soaked overnight. They should take around 11 minutes in a pressure cooker.)

1/2 cup of chicken or vegetable broth or stock (about four cubes worth, if you’re using frozen stock)

Clean the escarole leaves under cold water. This step actually takes the longest because escarole gets pretty dirty — it is, after all, grown in dirt — so I wash each piece individually. Give them a quick ride in a salad spinner to get off some of the water, but the leaves needn’t be perfectly dried.

Heat the olive oil in the pan. If you’re using anchovies, toss those in the pan and break them down with the back of a wooden spoon.  Then add the garlic and pinch of red pepper flakes and cook for about a minute and a half. You basically want to perfume the oil with the garlic without browning it. Bitter garlic is never fun.

Once the smell of garlic perfumes your kitchen, add the escarole, a pinch of salt and give it a stir. The leaves should still have drops of water on them from their cleaning, which will help with the inevitable shrinkage that always happens to leafy greens (Don’t even get me started on spinach). Cover the pan for about five minutes, during which time the leaves will shrink down. 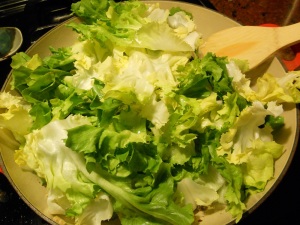 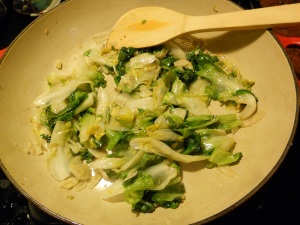 Remove lid and gently stir the beans into the garlic (anchovies) and escarole. After about five minutes, add the half cup stock.  Cook for another five minutes or so. The beans should kind of melt into the dish, giving it a creamy texture.

Serve over crusty bread in a low-rimmed dish.