I spent most of March really wanting a hot bowl of broccoli and cheddar soup. I have no idea why it took me five weeks to realize I could make an entire pot of it in my own kitchen. But last week I did, and even shared a bowl or two with Rich and Lilli. I wasn’t going to mention it here, as I had made up my mind to share an asparagus recipe with you because it is finally, officially springtime, and hot creamy soup seemed so unseasonal. 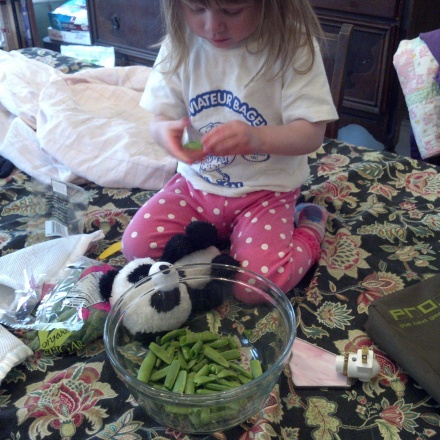 But then I noticed a post on Facebook from an old friend of mine, saying he was going to try and recreate Quizno’s broccoli and cheddar soup. He explained that he likes to make big pots of soups and stews and freeze them for when he and his wife both worked late. “Make some popovers or some fresh corn bread and I’m a hero.” Clearly the universe was sending me a message, and that message was to share this soup recipe with everyone so that we could all be weeknight heroes.

So I made this soup a second time over the long holiday weekend, and froze it for the next time I want this soup, whether or not it’s in season.

A few things worth mentioning: I totally Sandra Lee’d this one. Rich tells me to not be so hard on myself and that Sandra Lee would have doctored a can of stuff from the pantry, but I definitely cut a bunch of corners on this one. And you know what? I’d do it again. For instance, instead of buying a head of broccoli, I chopped up a bag of broccoli florets. I used a bag of shredded cheddar cheese instead of standing at the counter and grating a block of it. And I used a box of organic vegetable stock I keep in the pantry.

The recipe is from Soup: A Kosher Collection by Pam Reiss, a cookbook I know I snatched off a pile of books to review from when I worked at a Jewish paper over a decade ago. Every recipe I’ve tried has been great, and the author not only categorizes the recipes by dairy, meat, parve, and Passover appropriate, but also says whether each recipe is good to freeze or not.

So there you have it. A great soup that comes together in less than a half an hour. Have it for dinner tonight. Or have it for lunch next month. The choice is yours.

Broccoli and Cheddar Soup from Soup: A Kosher Collection by Pam Reiss

Over medium-low heat, sweat the onion in olive oil for 5-8 minutes. Wilt the onion, but don’t brown it.

If you are using broccoli stems as well as florets, peel them with a vegetable peeler or paring knife to remove the tough, fibrous skin from the tender flesh, then chop them up.

Add the broccoli, salt, pepper and stock to the soup pot, cover and bring to a boil over high heat. Turn the heat down so that the soup simmers on low and cook approximately 10 minutes. The broccoli should be tender but not overcooked.

In a separate bowl, whisk together the half-and-half (or heavy cream) and flour. Whisk this mixture into the soup and allow to simmer another 2-3 minutes, until the soup thickens.

Stir in the cheese until it is well incorporated and serve.