I must admit, I was getting worried.

Purim is fast approaching – it will be here on Wednesday night – and I wasn’t sure if I’d be able to fulfill the four mitzvot – commandments – that are prescribed for the holiday. I know I could take care of the first three, no problem:  listen to the megillah, the Scroll of Esther which tells the miraculous story of the holiday; attend a feast; and give tzedekah, charity. Now, the fourth mitzvah, making and delivering shaloch manot baskets, is probably my favorite mitzvah of all 613, and things are going to be tricky this year with the whole back thing.

The baskets must contain at least two types of ready-to-eat foods, and I deliver them the day of the holiday. (Yes, I take some vacation to take care of that task.) I love the making of the baskets, and given the proximity of Purim to Easter, finding fun baskets is never a problem. I love gathering the foods – usually some fruits, nuts, candies, a little nip for the 21+ crowd, some chips, and, of course, my homemade hamantashen. But, as I’ve mentioned in the past, I’m a little slower in the kitchen these days, and the making of the dough, the rolling, the cutting. Well, making the hamentashen seemed like a very exhausting, almost daunting task this year.

This afternoon, Sara made sure I don’t have to worry anymore. We had been plotting for a few weeks to make this blood orange and pistachio tort, and, while we were already in the kitchen, she made the executive decision to make hamantashen at the same time. (OK, I had been hinting pretty strongly about the idea and she got the hint.) And little E helped us make the cookies. I assured Sara that making hamantashen, along with challah, is one of the best baking projects for little ones so there would be no child labor laws broken. 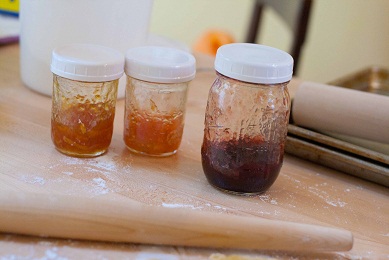 I had had no idea what could out-do last year’s fillings, but Sara came through with homemade plum jam and blood orange marmalade.

If you’re not sure you’re going to have the time to do some canning between now and Wednesday night, there’s always last year’s recipes featuring pistachio, honey and cardamom and pine nut, honey and thyme.