By now you know the drill: I disappear for a while, then show up again talking about a new job, or sharing photos of a new baby. Nope, no new babies, but I do have news: We moved! After 20 years away from Western Mass, I finally made it back home late this spring. And I do mean literally: we’re living with my very dear, very patient, very generous parents until we find a home of our own.

My new gig is in the Donor Relations department at Smith College, where both Sylvie and Miriam went (although they actually met on JDate, for those keeping track). We were very lucky that Rich’s boss asked him to stay and telecommute, so he’s also based in Northampton at a shared workspace.

There were many reasons why I wanted to be in Western Mass: like being closer to my parents, having a house with a yard, and wonderful schools for the girls. Lilli goes to Fort Hill, the early childhood education center through Smith College where arts and crafts is referred to as “staging a provocation”. Bea is at The Little Schoolhouse, a home daycare where they provide the organic bamboo diapers that get composted via bicycle, the milk and yogurt are delivered every day from the farm, and they grow their own fruit. As my New York friend Jason quipped, “You’re living on the set of Portlandia.” 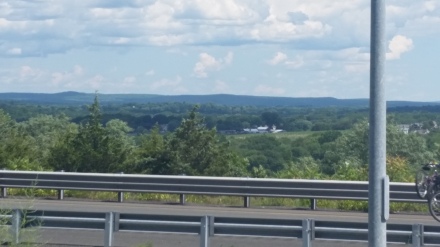 My commute. I’ll make sure to snap some photos during peak foliage this fall.

When I can, I’ve been taking Lilli to Shabbat Shabloom, a Friday morning sing-along on Abundance Farm. Afterwards we pick flowers on the farm for the dinner table. And of course it’s great to have Shabbat with Oma and Zayde every week. So when I received an offer to review a book called A Month of Sundays: Striding Toward Spiritual Refreshment with Good Food for the Road, I smiled and said I’d love a copy. Sure, the book’s author Paula Hartman and I observe different Days of Rest, but I still get it. The book promises “food for the body as well as the soul” across 31 chapters of reflections and meals. To be honest, most of the recipes didn’t sing to me, and there’s no index, which is somewhat frustrating. But one recipe, for corn fritters, caught my eye. 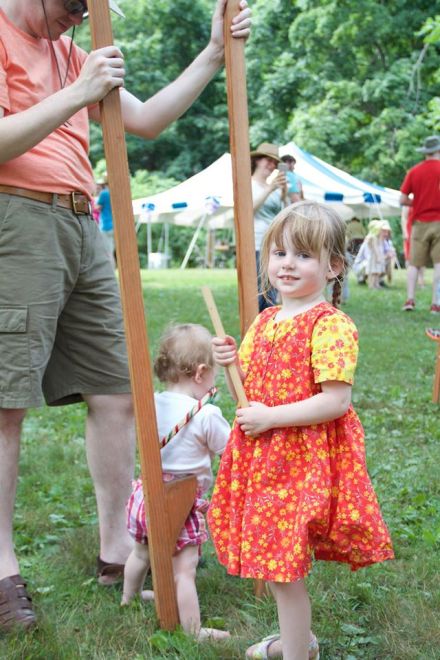 My friend Mark snapped a series of wonderful photos of the girls at The 19th Century Circus – Creatures of Mystery and Bliss, at the Emily Dickinson House in Amherst.

It’s August in Western Mass, which means there is fresh corn, tomatoes and squash wherever you turn. Honest to goodness, you turn down a street and there will be a sign for those foods, grown in someone’s backyard, for sale in the driveway. The farm stand my mom took me to growing up is still going strong, so now I take Lilli to get the corn and tomatoes.

I had actually asked my mom to pick up some corn for a braised corn recipe I bookmarked in another new cookbook, but since I had everything else on hand, I chose to try this one instead. And it was great! The recipe doesn’t call for salt, although I’ve added it, and Rich and Mom both agree it could benefit from some spice. I liked it as is, but I don’t disagree with their input. My mom doesn’t bake and only had self-rising flour in the house, which I knew would work perfectly. I actually had fancy corn meal on hand; someone gave it to me on the Fourth of July, although I have no idea who it was.

This last thing is very important so I will write it in BOLD ALL CAPS: PLEASE BE VERY CAREFUL WHEN FRYING THESE FRITTERS. Fresh corn spurts and jumps about in the pan. You’ll need to wear long sleeves while frying and keep kids and pets out of the kitchen while you make these. 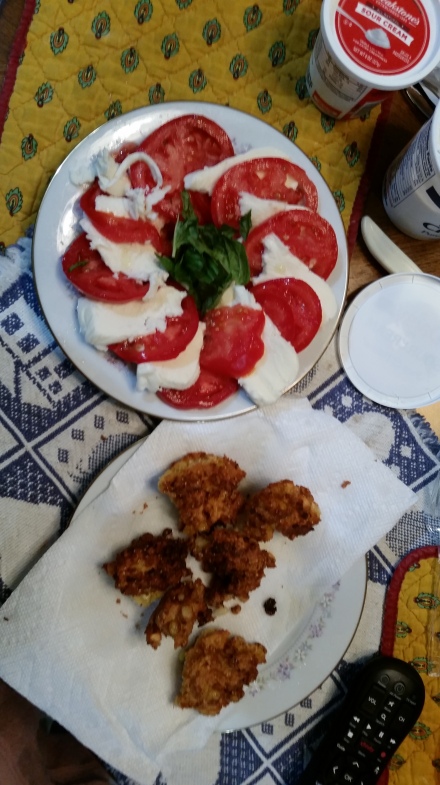 Heat oil in a large bottomed skillet with sides. (I prefer non-stick for my frying projects; Rich prefers cast-iron. I will leave that up to you.) To test the oil, drop a dot of the batter into the hot oil; if it sizzles, continue by dropping by teaspoons into the skillet. Cook until browned, then turn the fritters over and cook until that side is brown. This should take no more than 3 minutes per side. Drain on paper towels to remove excess fat.

The recipe says it makes approximately 12 fritters, but I got closer to two dozen using an actual teaspoon that you use to stir your tea. 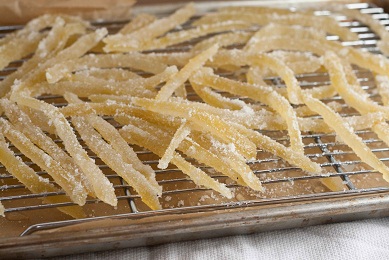 When Sylvie was in college, she was co-founder and president of her house’s fruit club. I’m not sure if they had to officially apply to be fully recognized by the administration, but I do know they held their meetings following the house’s Friday afternoon wine and cheese hour, which followed the Friday afternoon tea. (And we wonder why college costs $55,000 a year.)

Because they went through the bother of founding a fruit club, she and her co-members steered away from eating the everyday apples and bananas. They enjoyed some fruits one usually reads about in Saveur magazine, like the Asian mangosteen and the New World custard apple, which has quite a striking resemblance to an artichoke if I do say so.

They also loved enjoying fruit that was complicated in its preparation, like the pineapple, the pomegranate and the pomelo. I’m going to assume you’ve probably heard of the first two, but chances are you might be unfamiliar with the third. The pomelo is a rather large citrus fruit from Asia, and oftentimes Israel. (You can find it locally at Russo’s.) Sometimes its skin is green, sometimes it’s more yellow, and it looks like a grapefruit on steroids. 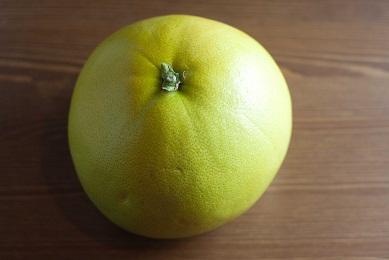 However, if you picked up this mammoth citrus fruit, you’d be very surprised as to how light it is. The actual amount of fruit in a pomelo is more akin to a clementine or maybe a tangerine. And it takes a good 10 minutes to actually get to the fruit. First there’s the thick skin to cut through. Then there’s an almost impenetrable bitter pith that surrounds the fruit. I hope I haven’t scared you away from trying a pomelo, I promise you it’s a very nice refreshing fruit when you finally get to it. 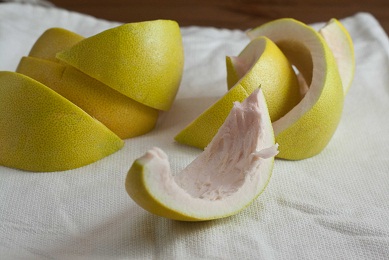 That fruit, in particular, creates a lot of refuse. As Syl likes to kid, “If it wasn’t all compostable, I’d call the EPA about it.” But my friend Sara came up with a wonderful solution: candying it. Using a Martha Stewart recipe meant for the common orange, or maybe a grapefruit, Sara had the genius and foresight to do the same with the pomelo skin. I thought I would then dip the candied citrus in a ganache and make a pomellete (orangette, but with pomelo) but, honestly, it’s great as is. 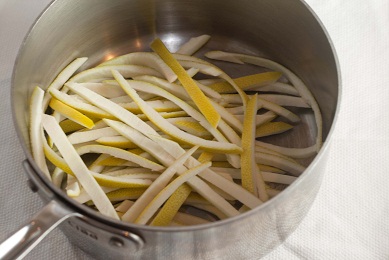 Full disclosure: This was all Sara. She did all the legwork on this one, from coming up with the idea, to patiently paring away the thick pith, to taking the photographs. I’m just not up to doing the standing that’s necessary to get a good angle on paring away the pith. Sara’s also got infinite amounts of patience for other extremely time-consuming, detailed tasks, like making blood orange marmalade or cultivating her own yogurt or baking sourdough bread from scratch every week. Oh, and being a lawyer and a mommy.

Don’t worry, I reciprocated as best I could this weekend, hosting her boys to enjoy some cupcakes I’d won off a blog contest. As you can see, H really enjoyed his. 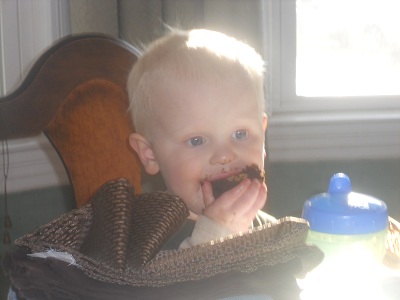 Please Note: Sure, you could also use this recipe for grapefruit or oranges, but try and find a pomelo. If you ask me, there’s nothing more exciting than trying a new food.

One pomelo (two grapefruits or three oranges or four lemons)

4 cups sugar, plus more for rolling

Using a paring knife, make 6 slits along curve from top to bottom of the pomelo, cutting through peel but not into fruit. Using your fingers, gently remove peel. Reserve fruit for another use. Slice each piece of peel lengthwise into 1/4-inch-wide strips. Using a paring knife, remove excess pith from each strip and discard.

Place strips in a large saucepan, and cover with cold water. Bring to a boil, then drain. Repeat twice.

Bring sugar and water to a boil, stirring occasionally until sugar dissolves, then stop. Wash sides of pan with a wet pastry brush to prevent sugar crystals from forming. Add strips to boiling syrup, reduce heat to medium-low, and simmer gently until strips are translucent, about 1 hour. Remove from heat, and let strips cool in syrup. (Strips in syrup will keep, covered and refrigerated, for up to 3 weeks.)

Using a slotted spoon, transfer strips to a wire rack placed on a rimmed baking sheet. Wipe off excess syrup with paper towels, then roll strips in sugar. Arrange in a single layer on a wire rack, and let dry for at least 30 minutes.