For Rich’s birthday (not to be confused with Father’s Day or our anniversary, all which happen within a week of each other) I made strawberry-peach-basil shortcakes and shared the recipe for it in this week’s There is a Season column.

I’ve been going through a Southern thing lately. I was offered a near-free subscription to Garden & Gun magazine, much to the dismay of Rich, and I’ve been pleasantly surprised. The articles are interesting, the writing is excellent and the recipes are creative. He grumbles about it, but I point out that some of the best American writers of all time are Southerners. (Not counting John Grisham, and I say that having gobbled up four of his novels 20+ years ago.) 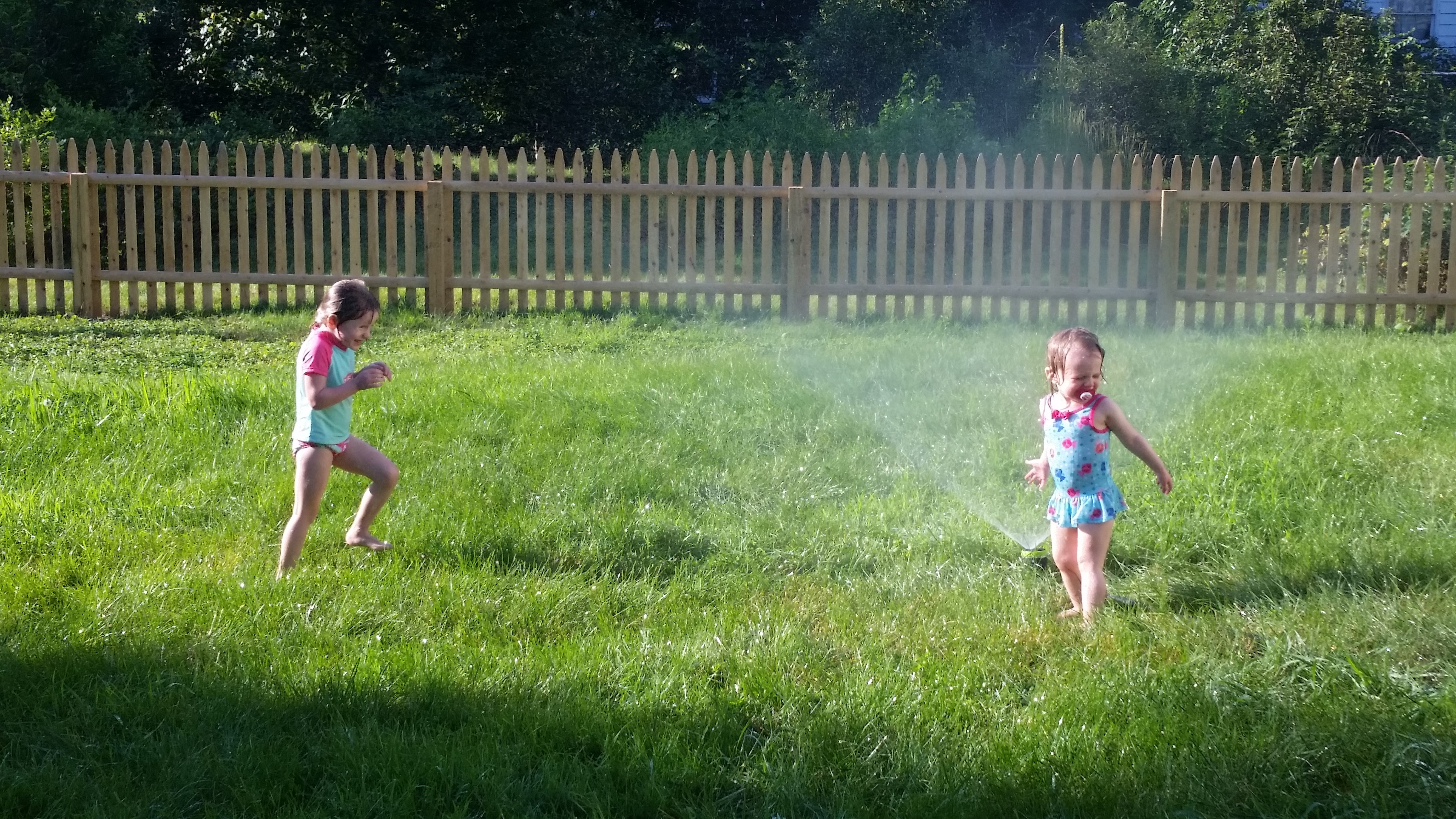 When I was in college Sylvie and I went on a road trip to Graceland. We actually didn’t make it — there was a dental emergency in Nashville — but the scenery was breathtaking. Honestly, if you’re looking to see some of the best of what the United States has to offer, visit the Blue Ridge and Great Smoky Mountains, and drive the Shenandoah Skyline. The beauty of Appalachia will make you weep.

Over the past few months I’ve borrowed a number of Southern cookbooks from the library. Truth be told, there wasn’t a thing I could eat in Edward Lee’s Smoke and Pickles. My Two Souths also relied heavily on things that oink and creep and crawl on the bottom of the ocean, but there were some gems in it. Deep Run Roots by Vivian Howard was a good book, but too sprawling; she could have spread all those recipes out across two or even three books. Sean Brock’s Heritage is excellent, although there’s still a ton in the book I can’t eat. (If you’re curious about what Jews can and do eat in the South, definitely check out Marcie Cohen Ferris’ Matzo Ball Gumbo: Culinary Tales of the Jewish South.)

So when I was offered Fruit, A Savor the South cookbook by Nancie McDermott, I jumped at the opportunity: A Southern cookbook based on foods I could actually eat. Well, sort of. There are some fruits I just can’t find up here, and some I’ve never even heard of, like mayhaws, scuppernong grapes, and pawpaws. But for the fruit I can get hold of, the recipes are terrific: fresh peach fritters, watermelon-rind pickles, Okracoke Island Fig Cake with Buttermilk Glaze, horchata made with cantaloupe seeds.

The recipe I decided to share with you is the strawberry shrub. I figured most of you have best access to strawberries. A shrub is a fruited drinking vinegar that has its roots in the sultry climates. The root of the word is from the Arabic sharab, which means “to drink”. 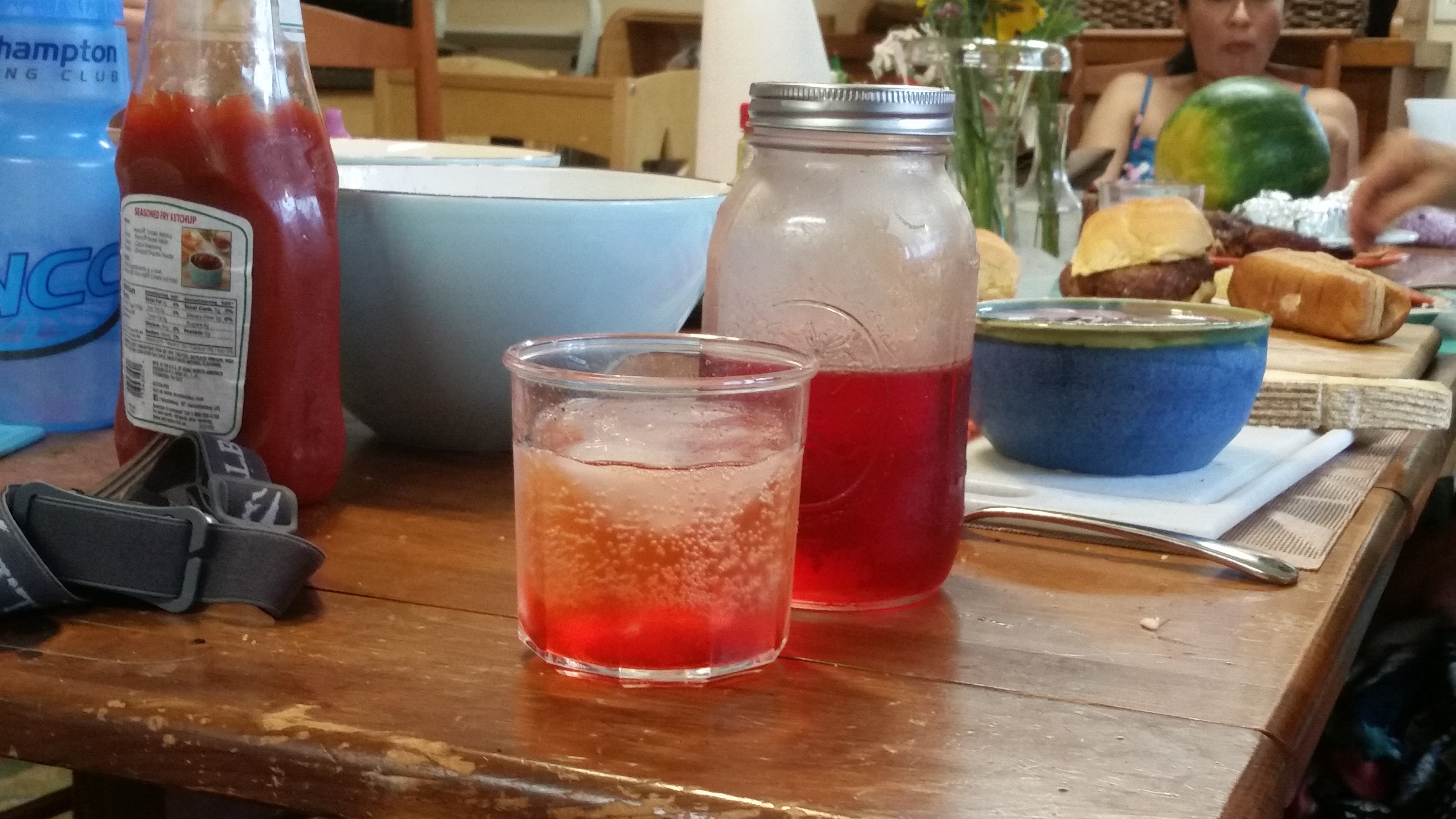 As Nancie puts it, “Shrubs are a lovely means of preserving summertime berry goodness for sipping on the porch while lightening bugs flicker or by the fireplace come winter. Vinegar adds a tangy kick to the ruby fruit, making a syrup that can be added to club soda or sparkling water to make a homemade soft drink, or stirred into a champagne, white wine, or cocktail for a spirited refreshment.”

We cut ours with seltzer from the Soda Stream and it was refreshing and delicious on a warm July night. It’s a bit like having a homemade Italian soda, now that I think about it. Rich put some in a beer, and said it was a little like a Berliner Weisse, a sour wheat beer often drunk with raspberry syrup. In this case, the tartness comes from the syrup instead of from the beer.

The recipe calls for the jar to be set aside in a cool, dark place for 24 – 48 hours and to make sure the jar is not exposed to heat or light. I tucked mine away in the basement for two days. But since I found a snake in the basement last night, I’m never going back down there again. I’ll have to find another place to age my shrubs.

To sterilize the jars, I used the method from Artisan Preserving:

Wash in very hot soapy water. Do not dry the washed bottles or jars, but put them upright on a baking sheet, about 2 inches apart, and put in the oven. Turn on the heat to 350F and once the oven has reached this temperature, leave the bottles or jars in the oven for 20 minutes to ensure they are completely sterilized. Wear protective oven mitts when handling hot bottles and jars.

Prepare a large glass jar with a tight-fitting lid as directed.

In a medium saucepan, heat the vinegar until it is just about to break into a bubbling boil and remove it from the heat. Place the strawberries in the prepared jar and pour the vinegar over them, making sure they are covered by an inch of vinegar. Let cool to room temperature and then cover tightly. Set aside in a cool, dark place for 24 – 48 hours (be sure the jar is not exposed to heat or light.)

Strain the vinegar into a medium saucepan and discard the solids. Add the sugar to the vinegar and bring to a rolling boil, stirring to dissolve the sugar. As soon as the sugar is dissolved, remove the pan from the heat and let the shrub cool to room temperature. Pour the shrub into a clean, sterilized jar and cover tightly. Store in the refrigerator for up to 6 months.