“I don’t think you realize just how hard it’s going to be for you to eat,” numerous friends had warned me when they heard about our plans to visit Spain. Several thoughtful vegetarians warned me to stay away from the croissants, anything flaky, and to be wary of fried things. After a certain point, I began to imagine the country as a Homer Simpson-meets-Salvador Dali dream sequence: window shades made of thin slices of Iberian jamon and unicyclists juggling ham hocks in town plazas.

From a food studies perspective, I was fascinated by the idea of a food culture shaped through politics and religion. As a Jew, I wasn’t exactly sure what to expect from a country that had pretty successfully removed my people from their midst.

As it turns out, I ate like a pig (tee hee) and enjoyed some tasty, tasty tapas in Spain. I’ll admit, it helps that I eat fish, but some of the veggie-friendly tapas I enjoyed included pimientos de Padrón (fried little green peppers dusted with salt flakes) patatas bravas (crispy fried potatoes served with a fiery paprika sauce), fried Camembert served with a berry sauce, and piles and piles of olives. 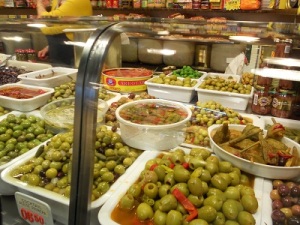 In Barcelona, the capital of Catalonia, I fell in love with the simple pa amb tomaquet: thick slices of rustic toast rubbed with garlic, then tomato, then drizzled with olive oil and sprinkled with salt. (If that doesn’t look like Spanish to you, it’s because it’s Catalan, which is somewhere between French and Spanish.) I’m already counting down the days until August and its lovely tomatoes to make that one. And I was tickled to find tons of “Russian Salad” a type of potato salad I ate buckets of as a kid at my best friend’s house, who is originally from Latvia. 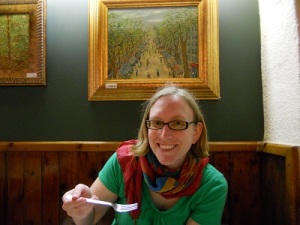 But what really made Spain a joy for me was the fish. I couldn’t stop eating boquerones, marinated white anchovies. (Note to self: Next time I go to Spain, make sure to TRIPLE wrap the glass jars from Barcelona’s La Boqueria market, so as to avoid another oily/fishy suitcase situation. Fortunately, the fish survived the trip, and the cats have been all over the suitcases since we got back. Everyone wins!)

When I wasn’t scarfing boquerones, I was enjoying other fishy delights. Anchovies were common, either on toast, wrapped around bright Spanish olives skewered by toothpicks, or fried. In Barcelona, I enjoyed a tapa of baccaloa (salt-cured codfish) stuffed into sweet red peppers, and I had an absolutely gorgeous, perfectly fried piece at a cafe on the Plaza Mayor in Madrid. 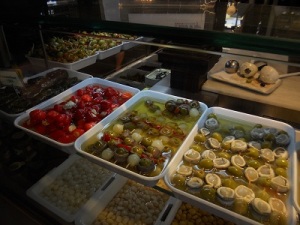 I am very mindful of my tuna intake — that whole mercury and child-bearing age thing — but I definitely had more than one dill pickle that had been sliced open and stuffed with the pink fish and roasted red pepper, then skewered shut with toothpicks holding olives and cocktail onions. 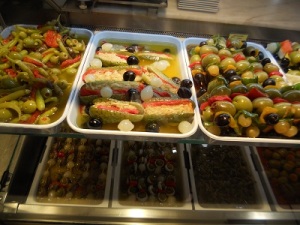 For 1.5 Euros, this pickle racecar can be yours.

It’s hard to say whether I preferred the Catalonian foods of Barcelona or the tapas of Madrid. Although we were armed with some top restaurant suggestions, every decent bar in Madrid will serve you a tapa with your drink order: Manchego cheese, La Tortilla Espanola and tuna shmeared on baguettes. But overall, I think my favorite small bites were from El Mercado San Miguel in Madrid. Think of a glass-enclosed, very high-end Faneuil Hall and Quincy Market, full of food vendors selling everything from thin slices of Iberian ham on crispy baguettes to spicy chorizo, fried croquettes of spinach and cheese, cups of gazpacho, and creamy salt cod on baguettes.

And the sweets in Spain! Chocolate, nuts, marzipan and ice cream. 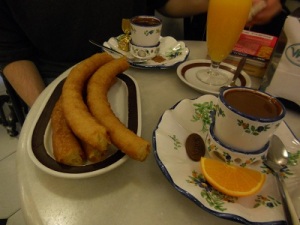 (And of course, Rich got his jamon jam on. Witness for example, El Museo del Jamon, a popular Madrid chain.)

So yes, I ate well in Spain. But I was still a little uneasy being a Jew in Spain. One of the big sites in Madrid, La Plaza Mayor, was the site of executions during the Inquisition. The bases of the lampposts in the square memorialize some of the victims. It’s not that the Spanish are overtly anti-semitic so much that they did such a good job of purging the Jews centuries ago that there’s barely any Jewish community there today. Currently, there are barely 50,000 Jews in all of Spain; in the 14th century, there were about 500,000.

We were in Madrid for Friday night, and part of me wanted to find a place for Shabbat services. In case that I had forgotten for one minute that I married the most amazing man I have ever met, without any prompting, Rich removed the worry for me by researching, locating and writing in Spanish a synagogue he knew I would feel comfortable praying at. The congregation Rich tracked down for me was teensy, having been founded by 80 families, mostly from Argentina. To put it in perspective, there are 5 million people living in metropolitan Madrid today.

Lest you think we did not actually visit any sites: La Sagrada Familia

On that very warm Friday night, we rode the subway from our hotel in the heart of Madrid to the very outskirts of the city. We walked and walked until we finally reached the right street and the right number, but had a little trouble finding the congregation. Eventually we found them, about 55 altogether, in a sweltering recessed side room of an apartment complex. They weren’t exactly hidden, but I was still reminded of the morranos during Queen Isabella’s reign.

I barely speak Spanish but had no trouble following the service. That Friday night, thousands of miles from my little home in Boston, I read and spoke the same language as everyone else in the room. I knew when to sit, when to stand, and when to bow. I recited some of the most magnificent poems the Jewish civilization has ever produced in the country where they were written. The prayer book was translated, from Hebrew to Spanish, and every so often, Rich would nudge me, excited that he was finally making use of the Spanish component of his comp lit degree. “Honey,” I whispered softly, “you don’t have to translate for me here. I can understand the Hebrew. My parents made sure I learned it when learned my ABCs.” After the service, there was a kiddush or, as Rich called it, Jewish tapas. 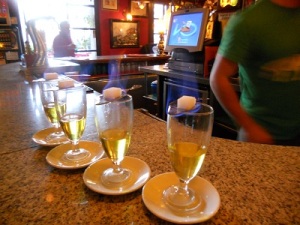 For me, Judaism is about being a part of a civilization. That Friday night, I was proud, and I must admit, a little weepy, to participate in its rituals in a country that did everything it could to eradicate it.

This weekend, I will be performing the same rituals that my little band of survivors will be doing all over the world. I will remove all unleavened foods, pots, pans and utensils from my kitchen, clean the condo from top to bottom, and drag up my entire Passover kitchen from the basement. For the next eight days I will not eat anything that contains chametz or has come into contact with it, as consumption of virtually all grains –including wheat, barley, spelt and rye — is prohibited in the Ashkenazi tradition.

Cooking on Passover is a challenge, but I assure you, we eat like Ferdinand and Isabella, minus the pig. To kick off Passover and commemorate the Spanish leg of our European adventure, here’s a recipe of Tortilla Espanola, a traditional and ubiquitous Spanish dish that also happens to be kosher for Passover. Eggs are a go-to Passover ingredient; I know I will have at least one asparagus frittata in the next week.

Can you imagine waking up and seeing that in the morning? Gaudi did.

I’m using Mark Bittman’s recipe as it’s pretty much flawless. He calls for any waxy potato; I used Yukon Gold and was quite pleased with the results. If you are using a mandolin, 1/8 inch is the way to go. I don’t have a kosher-for-Passover mandolin, so don’t worry if you don’t either. If you do have a kosher for Passover mandolin, can I come over and play in your kitchen? And don’t worry about all the olive oil; a lot will be poured off. As Bittman writes, “Save it in the fridge if you like: It’s delicious and good for sauteing virtually anything.”

My one tip about the eggs: According to the laws of kashrut, Jews are forbidden to eat blood. As a result, we check eggs for blood spots in a separate dish. I also like this step as insurance against eggshells getting in places where they’re not supposed to be.

Spanish Tortilla from Mark Bittman’s How to Cook Everything

1. Put the oil in a large nonstick skillet over medium heat. About 3 minutes later, add a slice of potato; if bubbles appear, the oil is ready. Add all the potatoes and onion and sprinkle with salt and pepper. Turn the potato mixture in the oil with a wooden spoon and adjust the heat so that the oil bubbles lazily.

2. Cook, turning the potato mixture gently every few minutes and adjusting the heat so the potatoes do not brown, until they are tender when pierced with the tip of a small knife. Meanwhile, beat the eggs with some salt and pepper in a large bowl. 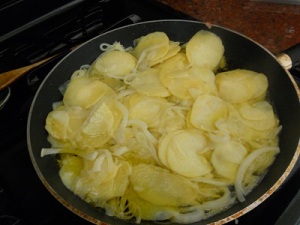 3. Drain the potato mixture in a colander placed over a large bowl to reserve the oil. Wipe out the skillet, return it to medium heat, and add 2 tablespoons of the reserved oil. Combine the potato mixture with the eggs and add them to the skillet. As soon as the edges firm up — this will only take a minute or so — reduce the heat to medium-low and cook, undisturbed, for 5 minutes. 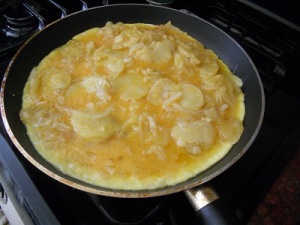 4. Insert a rubber spatula all around the edges of the cake to make sure it will slide from the pan. Carefully slide it out — the top will still be quite runny — onto a plate. Cover with another plate and, holding the plates tightly, invert them. Add another tablespoon of oil to the skillet and use a rubber spatula to coax the cake back in. Cook for another 5 minutes, then slide the cake from the skillet to a plate. (Or you can finish the cooking by putting the tortilla in a 350F oven for about 10 minutes.)

The tortilla can be served as a main dish, with, perhaps a side salad, or as a side to a larger dish. Serve warm (not hot) or at room temperature. Do not refrigerate.