A few months back, I attended the kickoff event for the Boston Food Bloggers website. Rachel, the mastermind behind the website, had teamed up with Christine from Urban Spoon, who waved some sort of magic wand and made it rain free samples and restaurant gift cards. The event was hosted at The Gallows, who plied us bloggers all night with sliders so big they barely slid and paper cones of poutine.

But it was the massive bowls of spiced, caramelized popcorn that were the hit of the night. I grabbed a handful and started munching. “Rich, try this popcorn,” I said between bites. “It’s the strangest thing, but there’s a flavor that I can’t seem to put my finger on. It’s sweet, but salty, and there’s this smoky flavor. What is this? Why don’t I recognize this taste?” I asked to no one in particular and wandered off in search of more free samples.

A few minutes later, Rich came up to me. “Um, honey?” Rich began. “What?” I asked as I popped another fistful of the mysterious popcorn in my mouth. “The taste? The one you’re having trouble with,” Rich said with a sly smile creeping across his face. “Yes?” I stopped crunching. “That’s bacon.”

Argh. Stupid bacon. I dumped my fistful of the porcine popcorn and wandered off to wash my mouth out. Along the way, I spotted a fellow blogger I knew to be vegetarian who was popping the kernels into her mouth. “Stop!” I said. “That popcorn has bacon in it!” “Oh, I know,” she said with a shrug. “”It’s just so good!” And she wandered away to top off a bowl of SoCo Creamery ice cream with some of the illicit popcorn.

I’ll be so happy when the bacon trend is over and people stop putting it into everything from cupcakes to mixed drinks to popcorn. As I write this, there’s an advertisement for something called “Baconalia” at Wendy’s on the television. It haunts me, I swear.

I’ve wanted to make my own spiced popcorn after the bacon debacle, and last week, when I catered my vegetarian friend Jonathan’s 30th birthday party, I deemed the Kentucky Derby-viewing portion of the evening, complete with fancy hats and mint juleps, the perfect time to give it a shot. 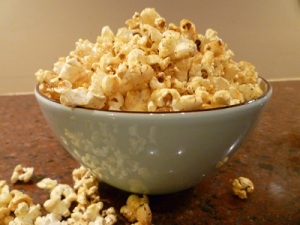 There’s no super secret to this recipe. I took a Martha Stewart one and dabbled with it a little bit. I used fresh thyme instead of ground, because that’s what I had in the house. I added some sugar to give a layer of sweet to the spice. I pop my corn in a large pot, but you can just as easily pop a bag in the microwave and toss in the spices and give it a shake. I used butter, but to keep things vegan, you can use margarine. It’s also a great pantry recipe. Gourmet popcorn, minus the stupid bacon.

In a bowl, mix together:

Heat the oil and one kernel in a large pot. Once it pops, add the rest of the kernels to the pot. Wearing potholders, lift the pot occasionally, holding onto its lid and give it a shake. Once your popcorn has popped, pour in the melted shortening, give it all a shake, then add the spice mix and shake it like a Polaroid picture.

This stuff is crazy addictive. I ate most of it while trying to photograph it and had to make great efforts to make sure there was some left for Rich.

7 thoughts on “Sugar and Spice and Everything Nice”